While I do quite a few preschool/day care outreach story times every month, in the springtime I visit even more of these locations than usual. I love getting to reach an audience of kiddos who might only hear a library story time once or twice a year. And while visiting so many locations might seem daunting as far a planning is concerned, I usually plan one awesome and adaptable story time that I can use throughout March, April, and May as I visit these one-time outreach groups. Sure, I end up reading the same books a lot--but that's why I choose to forego a theme and instead share some of my favorites!

I use this opening song for all of my preschool story times. I've enjoyed seeing the groups I visit frequently learn the song--they know that it signals story time is about to start. With groups I'm visiting for the first time, it's a quick way to get kids' wiggles out before settling into the first story. 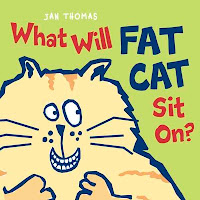 Story: What Will Fat Cat Sit On? by Jan Thomas
I think Jan Thomas can do no wrong when it comes to quick, goofy, engaging stories for pre-readers of almost any age. I preface this book by saying that the story is kind of silly--and the kiddos immediately begin giggling. The whole narration consists questions about what Fat Cat should sit on (The cow? No! The chicken? No! Etc.), and kids love the great illustrations and the zany idea of a fat cat sitting on a pig. Simple and guaranteed to start the story time off right!

Story: The Chicken of the Family by Mary Amato OR Stop Snoring, Bernard! by Zachariah Ohora
For slightly older kids, I'll read Amato's The Chicken of the Family, a story about young Henrietta and her two older sisters who tease her about being a chicken. It's a longer story, but it has really held the attentions of four- and five-year-olds. After all, what preschool hasn't experienced a bit of teasing at the hands of an older relative?
For younger kids, I'll read the newer Stop Snoring, Bernard! by Ohora. Poor Bernard, he really wants to get along with all his zoo friends, but his loud snoring drives them all batty. This is a great story about why being nice to your friends is important. 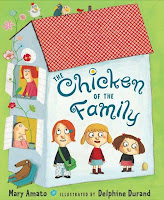 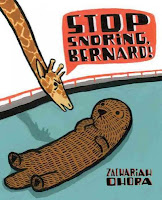 Fingerplay: "Two Little Parrots"
As an intro to my next story, which features a parrot, I changed the birds in this simple fingerplay from blackbirds to parrots. Sometimes I have the kiddos just mirror my actions, sometimes I repeat twice so they can learn the words, too.

Story: Terrific by Jon Agee
This is definitely one of my favorite stories. A grumpy old man named Eugene expects the worst in every situation: when he wins a trip to Bermuda, he's sure he'll get sunburned; when he floats to a deserted island after his cruise ship crashes, he's convinced he'll be eaten by cannibals. (Note: I love when a preschooler then asks, "What's a cannibal?" They think the idea of a person who eats people is utterly ridiculous.) In actuality, he finds he's alone on this island with a parrot who, while he cannot fly because of a busted wing, does happen to know how to build a boat. This is a great story of friendship and a positive attitude, and it also introduces kids to the word "terrific" and, for the oldest ones, the concept of sarcasm. 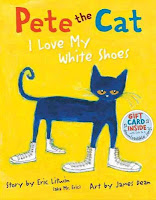 Story: Pete the Cat: I Love My White Shoes by Eric Litwin
This first picture book featuring Pete the Cat was overwhelmingly voted the best read-aloud picture book by Missouri preschoolers and kindergarteners last year. It's been a mainstay of my preschool story times--in fact, I still bring it to a number of the locations I visit monthly because they usually beg me to read it again. It's a great story about a cat who loves his white shoes so much he creates a song about them. And when he steps in messy things and his shoes change colors? He just adapts the words to his song! The kiddos are always excited to shout out the color Pete's shoes have changed, and they love singing his song with him. I don't mind rereading this one--by the third or fourth time they hear it, the kiddos are "reading" it right along with me! 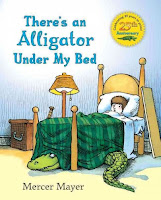 Story: There's an Alligator Under My Bed by Mercer Mayer
Mercer Mayer has written so many classics that translate really well to preschool story times. I love reading this story of a boy who schemes to get a good night's sleep by getting rid of the alligator living under his bed. This story is an exciting, quick tale that simultaneously quells fears of what lives under your bed and touts the ingenious problem-solving abilities of young kids. The artwork and page turns make for a great, suspenseful story, and its lightheartedly ominous ending always leaves kids smiling.

Depending on just how much time I've got left at the end of my story times, I'll either close with "If You're Happy and You Know It" or this song, which lends itself to being extended as necessary. My kiddos always appreciate the chance to wiggle and make noise by the time we're finished with all our stories, and ending with everyone waving goodbye is a seamless way for me to make my exit. Until next time, that is!
Posted by Amy at 3:27 PM