I led my final Science Club, Jr. program of the summer last week. The program has gotten such a great reputation that we had a huge combo crowd of folks who had registered in advance and folks who showed up day-of with a big interest in participating. And while I need to work with my fellow youth programming staff to work out the finer points of our registration/latecomers/walk-ins policies, I was glad to be able to allow 15 families--not just kids, as per usual--to participate. It was crowded, sure, but everyone was happily engaged in doing science.

In this particular program, I wanted for us to explore some of the properties of water. Or, more specifically, how some substances will or won't dissolve in water. To kick off our program, we shared a read aloud of The Gingerbread Man. This picture book choice may seem odd at first glance, but recall the story: the gingerbread man meets his ultimate demise because he must trust a fox to carry him across a river--a river which would cause him to fall to bits should he try to swim.


So we read the story, then we talked about what we observed happening. I was interested to discover that, when we started talking about why the gingerbread man couldn't swim, many children said that if he swam he would have melted. I would not have anticipated that bit of kid logic, although it of course makes sense to me in hindsight. This reasonable misconception opened the door for us to talk about what the word "dissolve" means and to practice saying it.

After we had the nuts and bolts of the concept of dissolving substances, we moved to our hands-on experiments. Each station was prepped with the following:


Before we really got to experimenting, we talked about how we could tell that the liquid in our bowls was water. This line of questioning helped reinforce that scientists never drink or eat a substance that they don't know what it is. It's never to early for science safety skills!

The first phase of the experiment was for kids to dump the cup of salt in the water and observe what happened. Kids were invited to stir their mixture with their popsicle sticks if they so desired. End result: the salt dissolves!

Phase two was dumping the fruit punch powder into the water to observe what would happen, again with optional stirring. This time around, only some of the substance dissolved. We were able to tell some dissolved because the water turned the color of the powder, but we could also see some undissolved powder on the bottom of the bowls. This allowed us to introduce the concept of saturation, when no more of a substance can dissolve in a liquid.

Advice: if at all possible, dump the bowls and refill with fresh water at this point.

Phase three was placing the Skittles candies in the bottom of the bowl. We just observed to start off, watching what happened to the colors of the candies as they sat in the water. The colors will bleed from the candies, ultimately leaving a white candy at the bottom of the bowl. Before giving everything a stir for good measure--because who can resist, really?--we talked about reasons why the color might come off but the whole candy might not dissolve.

Our fourth and final phase of the experiment was the graham cracker, which most closely resembled the gingerbread man of our story. Once again, after placing the graham cracker in the water we observed. Kids were interested to see how the graham cracker became visibly soggy before ultimately coming apart in pieces. I heard some great parent/child conversations about what this experiment suggests about dunking cookies in milk at home.

All in all, this was a great program--not too messy, easy for antsy young scientists to do the activities more quickly with their caregivers as desired, and a concept that kids encounter but didn't necessarily have the vocabulary to explain. It was a great summer for Science Club, Jr.!
Posted by Amy at 7:08 PM No comments:

9 Weeks of Pop-Up Programming for Summer

This summer, we offered weekly pop-up programs in the main entryway to the youth services department at my library. We changed up the activities each week and harnessed the power of summer teen volunteers to keep the pop-ups running smoothly. Full details ahead! 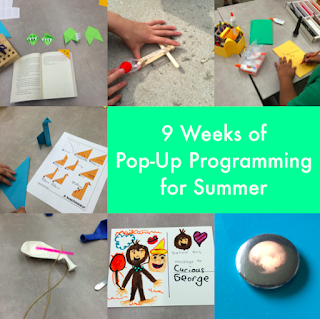 What activities did we offer?
Over the course of our 9-week summer reading program, we offered the following activities:

When did pop-ups take place?
Based on the calendar of scheduled programs and a rough guess at general patterns of foot traffic in the summer, we opted to offer pop-up programs on Thursday afternoons for approximately 90 minutes. After a few weeks of running the pop-ups from 4-5:30, with seriously dwindling numbers for the last half hour, we adjusted the time to 3:30-5 p.m.

Who ran the pop-up programs?
While I (or another staff member, the week I was out of town) was present in the youth department for the duration of the pop-up programs, a team of teen volunteers actually facilitated the pop-up activities from start to finish. I had a team of 5 teens who took turns rotating roles: one would be designated in-charge; one would make sure to take count of participants; one would move about the department to alert kids and families that an activity was taking place; and everyone would assist kids in completing the activity.

Who was the target audience for the pop-ups?
We wanted to offer activities that were accessible to children ranging in age from preschool through early junior high. Recognizing that that is a really huge range in age and ability, the litmus test for a program activity was whether a first grader might be able to complete the activity on their own/with little mediation. The volunteers were more than happy to assist kids who needed it, but we didn't want activities to be frustratingly complicated.

How were the pop-up activities received?
Really well! While there were some fluctuations in the number of attendees from week to week, we had a solid number of participants for every activity, and always a handful of kids at minimum who expressed really enjoying the activities.

Would we offer summer pop-ups again?
You bet! For next summer, I'll be considering not only what activities might be well suited to pop-up times, but also the best possible strategies for staffing them (volunteers? or part-time programming staff who can spend some work time making activities as well as leading them?) and when we offer them (scheduled? or truly pop-up, when we see lots of bodies in the department but no program on the calendar?). Lots to think about, including potential implications for school-year pop-ups.

What have been your most successful pop-up programs and activities for kids?