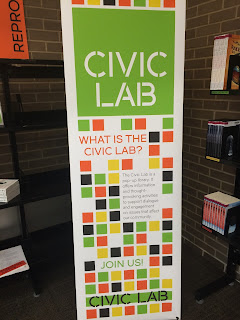 Civic engagement is on our minds at my library. Not just because this is an election year--although that certainly adds a layer to the conversation and mood around civic engagement in our community. Civic engagement has been on our mind for several years, and it's informed public programs and initiatives as well as discussions around our strategic plan. We've seen teens and adults having conversations about issues and things they see in the news, and children and their parents trying to figure out how to process those same issues and news items. After seeing The Uni Project in New York, this idea of civic engagement in the library seemed to coalesce for us around the idea of a mobile, pop-up space. And so after a few months' discussions, followed by a few weeks of planning and resource-making, we debuted our civic engagement space at the end of August.

Welcome to the Civic Lab at Skokie Public Library.

The Civic Lab is a mobile, pop-up library with resources and activities. Its first appearance is situated in the library itself--specifically, in our Boutique space, which features seasonal and themed collections throughout the year. The Civic Lab as a concept is meant to offer information and thought-provoking activities meant to support dialogue and engagement on issues that affect our community. For this two-month residency in the library, the Civic Lab is exploring six main issues of impact and importance to our community: Black Lives Matter; climate change; immigration; income inequality; LGBTQQI; and reproductive justice. 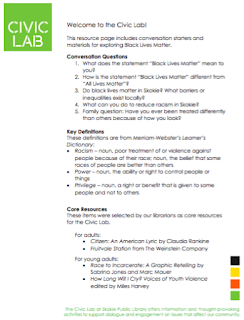 Six micro-collections comprise the bulk of the materials available in the Civic Lab. Each of our six focus topics is supported by six core resources: two for adults, two for teens, and two for children and families. These lists have been carefully curated, with library staff in nearly every department having input. We've curated these lists not to be neutral, but rather to provide introductions and perspectives on our six topics. Lists for further reading--which also live on our library website--provide even more choices for exploring a topic. All the core resources, further reading, key definitions, and conversation starters appear on handouts in the space. They're also available here: 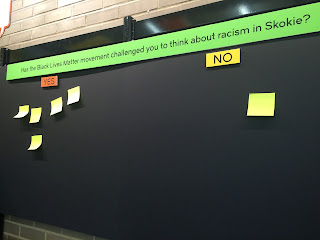 We're rotating some of the interactive components of the exhibit so that each of our six topics has an opportunity for closer focus and engagement over these two months. On one wall of the Civic Lab, we pose a general question relating to that featured topic; when we opened with the Black Lives Matter focus, we asked: "Has the Black Lives Matter movement challenged you to think about racism in Skokie?" The question sits atop a large board for voting, with bright-colored sticky notes ready to be placed on the sections for "Yes," "No," or somewhere in between. Pencils in the space allow patrons to write any comments on their sticky notes, too; and the longer the Civic Lab is up, the more comments people are sharing. 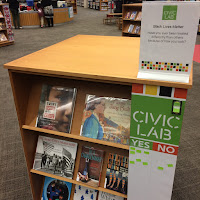 This type of voting component is taking place on a display unit in our youth services department as well. While the questions may be phrased differently for kids and families to be developmentally appropriate, they get at the same ideas and concepts.

We've also set a kitchen table of sorts in the Civic Lab. With boxes surrounding the table for sitting, and a box atop the table with conversation starters on it, the table is meant to be a place to stop and have a kitchen table conversation about these issues. We've left postcards on the table as well, encouraging patrons to share their thoughts--with a friend or family member, or just with the library in general--by writing them down and placing their postcard in our mailbox. These conversation starters are also the basis for some of our facilitated conversations taking place in the Civic Lab--more on those types of programs later. 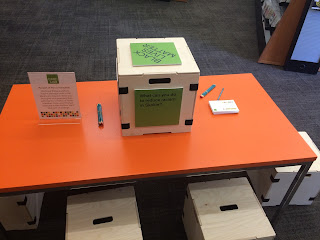 Today I wanted to share an overview of this first appearance of our Civic Lab. I'll be back in a few weeks to talk about some of the programming elements that accompanied this first iteration, and in coming moths I'll share details about additional instances when and where the Civic Lab pops up. In the meantime, explore the resource lists we've created; have a conversation with a friend or colleague around a topic of import to your community; and make a point of recognizing instances of civic engagement in your library practice.