Actually, She Did That: The Civic Lab for Women's History Month

The team of folks here at my library who curate the Civic Lab were having a meeting a few weeks ago where we were discussing potential topics for future Civic Lab pop-ups. Sometimes we tie our pop-ups to formal programs on our calendar, sometimes to topics in the news, sometimes to installations in the library, and sometimes to specific days or months of import or conversation. We were brainstorming what topic to focus on for Women's History Month, and we had plenty to choose from--there's a lot going on right now affecting women, have you noticed? You might be surprised, then, to hear that the person who came up in conversation was Kanye.

Or maybe you're not too surprised, because he came up in the context of one particularly annoying and eye-roll-inducing line from Famous: "I made that bitch famous," said in reference to Taylor Swift. As if he, a man, made her, a huge pop star who is a woman, famous because he physically took the stage and microphone away from her while she was winning an award. Gross.

And so we had our topic for the Civic Lab for Women's History Month: women who have accomplished something, but who do not get their deserved credit (often it goes to a man or group of men), or they are better known for something irrelevant to their accomplishments.

We called it "Actually, She Did That"--taking the mansplainer's favorite opening word of "actually" and shedding light on some excellent women throughout history whom many do not know and whose accomplishments have been snatched from them. 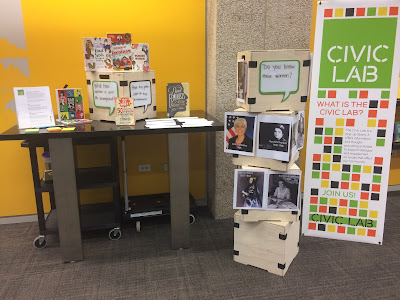 The central activity in "Actually, She Did That" was a game of sorts. On a column constructed out of our multipurpose crates, we affixed large images of 11 different women who fit our criteria stated above. (As one of the mother/daughter participant pairs said, these 11 are only the tip of the iceberg when it comes to women not getting the credit due to them.) Each image included the woman's name and date of birth (as well as death, where relevant). On the table next to the column, we had 11 slips of paper. Each slip noted the accomplishment of one of these women, with a parenthetical about how or why she hasn't gotten credit for that accomplishment. The goal was to try to match the woman to her accomplishment, learning more about these 11 fantastic women along the way.

Our 11 featured women were:

We had some really wonderful conversations with patrons as they engaged in this activity. Many recognized a few names or pictures, but couldn't place their finger on where they'd seen or heard of these women before. We share biographical facts with participants, many of them shaking their heads in frustration at just how common this type of credit-stealing is. One teen girl, participating with a friend, remarked after hearing the stories of several of the women, "Why do they keep giving away credit?" We talked about how it wasn't a question of these accomplished women giving away credit, but rather them having credit taken from them or given to someone else. These teens got mad. They demand better, for the world to see them and their friends and other women. As it should be.

We also put together a handout with resources for hearing more women's stories through an email newsletter, podcasts, and online videos. (See the handout here.)

We intentionally posed that first question on one of our crates, and we provided sticky notes and pencils for participants to weigh in. During the two hours a coworker and I facilitated "Actually, She Did That," however, no one wrote a response to the question. We don't think it was from lack of interest, but rather from the greater appeal of learning about the women whose images were front and center in the installation. We're hopeful that the public question, as well as the handout, provided fodder for reflecting on the women in participants' lives.

Monday was appearance number one for "Actually, She Did That." We'll be popping up again this Friday, and we're eager to see what types of interactions are prompted this time around. From there, we want to think about how to continue this idea of making clear space for women and women's stories beyond just Women's History Month.