The majority of programs I've been leading at the library this summer--which is just a small slice of the myriad offerings that come out of the youth department, BOOMbox, and digital literacy specialists--are focused around some aspect of STEAM. I really enjoying figuring out interesting ways to introduce and explore basic STEAM concepts with kids, and last week's Science Club, Jr., was no exception. 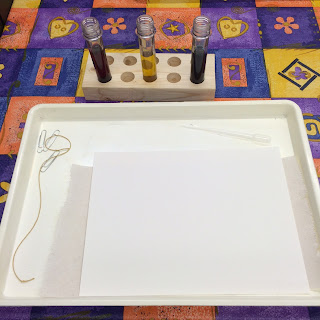 In that program, 15 kids and their caregivers got to explore gravity and its effects via a story and a few activities. To prepare, I set up trays for each child containing:


I start my Science Club, Jr., programs with a group story. The program happens in our craft room, which is on the small side; this means that, with tables set up for our activities, the read aloud happens with kids sitting on the floor and a few chairs in the back for some of the caregivers. Chairs get pushed out of the way when the story is done and hands-on activities begin. 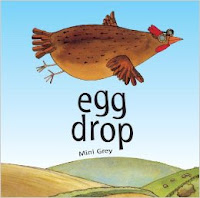 Our story to introduce gravity was Mini Grey's Egg Drop, a tale of an egg who just wants to fly. This is absurd, of course--eggs just drop!--but the story is a great one to talk about and ask questions throughout. It's pacing is perfect for young 3-year-olds to get a sense of what's going to happen to poor egg, but it's never so slow or obvious as to bore the older kids. Read it. It's wonderful.

After the story and talking a bit about gravity, including a demonstration of me dropping different objects from a height to see if, in fact, they all fall, we moved to the activity tables. First up was the string/paper clip activity. I demonstrated holding the end of the string in one hand, arm extended, and holding the paper clip end of the string by my nose. I then let go of the paper clip, causing it to swing downward and move the string like a pendulum. I counted how many times the string moved back and forth before it came to a rest--until the force of gravity was stronger than the momentum of back-and-forth. I then had kids do the same.

Kids reported how many times their strings had swung with a single paper clip, and I asked caregivers to help kids keep track of their number. Next we added a second paper clip to the first, repeating the experiment a second time. After counting the number of swings before that two-paper-clip-string stopped moving, we added a third paper clip for our final experiment trial. Kids gleefully shared their decreasing numbers as paper clips were added--allowing us to infer that as heavier items stop moving more quickly, gravity's relative effects can depend on the weight (mass) of an object. 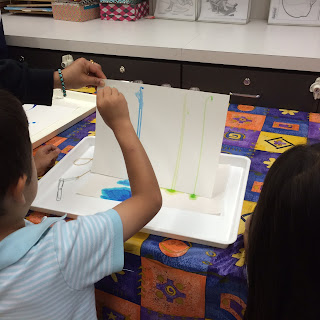 I like to conclude, whenever possible, with an activity that includes some take-away component, so we closed out our exploration of gravity with some gravity painting. To paint using gravity, kids learned how to use their pipettes to pull the watercolors from the vials and drop them onto the top of their watercolor paper, which they or a caregiver held perpendicular to the paper towel-lined tray. With the paper standing up straight and watercolor dropped at the top of the page, gravity pulls the paint downward in a line--effectively doing the "painting" for you. I was thrilled to see kids starting to figure out that they could make lines in different directions by rotating their papers, and I even had a few kids who rotated their papers while paint was dripping. By using red, yellow, and blue paints, kids also had the opportunity to talk about mixing primary colors, which reinforced an earlier Science Club, Jr., program. 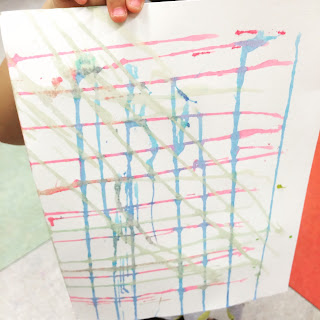 All in all, we had a great time exploring gravity. I was pleased to hear several of the attending families continuing to talk out in the youth department about gravity and how it pulls objects toward the earth, and plenty of kids said they were excited to take their gravity paintings home to show additional family and friends. Success!

Our science adventure opportunities for preschool-age children have continued at my library this summer, with seasonal additions of weekly Nature Play (outdoor sensory play time) and Tour the Sensory Garden (hands-on garden explorations) programs that have been quite well attended. We've also continued to offer Science Club, Jr., as a monthly offering. In our most recent Science Club, Jr. program, we explored bubbles.

To prepare for this program, I gathered:


We kicked off our exploration of bubbles with a story: Big Bad Bubble by Adam Rubin, illustrated by Daniel Salmieri. This delightful picture book suggests that, when a bubble pops here on Earth, it doesn't just disappear--it reappears in La La Land, where the monsters find bubbles terrifying. This fun, obviously fictional, story provides lots of opportunities for talking about what kids know about bubbles, making observations, etc. And a little bit of humor can go a long way to starting a program off well. 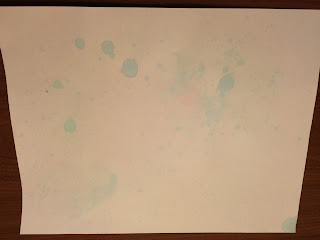 Our first hands-on activity was to see what bubbles leave behind when they do pop. I placed sheets of white paper and the small containers of now-colored bubbles on each table, and kids were instructed to blow their bubbles onto their papers. Note: instruct caregivers to hold the bubble containers while their kids dip the bubble wands and blow bubbles, as otherwise spills are guaranteed. As kids blew their bubbles onto the white paper and the bubbles popped, they saw the various shapes and sizes, now in color, that the bubbles left behind. Abstract bubble art! Our second hands-on activity was to see if we could blow bubbles in shapes that are not spheres. We talked about circles and spheres, then I gave each child a chenille stick to bend into another shape. These chenille sticks--now in the form of bubble wands with triangle, square, heart, and moon-shaped heads--were then dipped into pans of bubble solution I had set on the tables. We had a bit of a bubble party as kids with different shaped wands took turns demonstrating the bubbles they were creating. Much to the kids' delight, this activity shows that no matter the shape of the bubble wand, bubbles are spheres. Note: I highly recommend ending your program with this activity, or doing it outside if possible, as the floor is a bit of a slippery mess after all the blowing of bubbles around the room.

Thus ended our exploration of bubbles in Science Club, Jr. The topic seemed particularly apt to kick off the summer (this program happened early in June), and I heard many families say they'd be experimenting with bubbles at home as a result of attendance.