Didn't you just love science when you were a kid? Miss Frizzle and her Magic School Bus gang always had the most wonderful, quietly-educational adventures; Bill Nye made everything about science seem cool and understandable; and, frankly, the possibility of something blowing up or doing something similarly awesome seemed omnipresent. Science rocked.

That's why I offer regular science programming at my library.

On a recent evening, about 20 school-age kiddos came to my library for a Food Science program. I had set up our program room with three distinct stations: the "appetizer" taste test station; the "entree" heat station; and the "dessert" cold station. These stations were on the peripheries of the room, and kids sat on sit-upons in the middle. 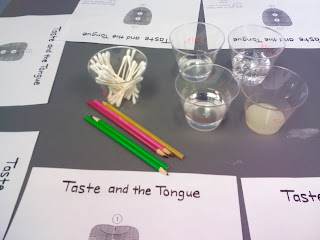 I opened the program talking a bit about the science of taste--tastes buds, four flavors (salty, sweet, bitter, sour), etc. Everyone in the room received a map of the human tongue with blank lines pointing at each of the four main taste hubs, then they crowded around the testing station. I had set up four testing groups, each with salty (salt water), sweet (sugar water), bitter (tonic water), and sour (lemon juice) solutions and plenty of q-tips for dipping and applying to the tongue. (I emphasized very strongly that each taste needed to be done with a fresh, clean q-tip; I didn't observe any double-dipping.) The kids pressed each solution-soaked q-tip to the four areas of their tongues with the goal of identifying which area is most sensative to which taste. I've never seen so many kids make sour-puss faces at the same time! 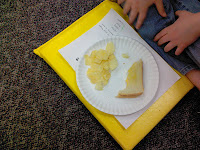 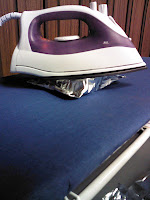 After we had gone over the official tongue taste map, we moved along to talking about heat. We talked about evaporation and heat with the assistance of a potato and potato chips, and then we talked about melting using the glory that is an ironed cheese sandwich. The kiddos thought it was crazy perfection to wrap a cheese sandwich in foil; iron the packet with a hot clothes iron (no steam function!); and then enjoy a gooey-centered ironed cheese sandwich. (Note: If you want to use this activity in your library, pre-iron all but the example sandwich before the program and then just briefly reheat--otherwise the process takes too long.) We then took about ten minutes to enjoy our ironed cheese sandwich and potato chips dinner while talking about our favorite science topics. 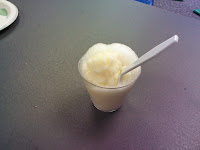 Dessert is the epitome of saving the best for last, is it not? We talked about cold and the process of freezing, and then I wheeled out the last activity: ice cream in a bag. We used this activity frequently at the summer camp where I counseled, and I'm happy to say that, though messy, it translated well to a library food science program. Every kid got a baggy of a milk, vanilla, and sugar mixture, and then found a shaking buddy to share the task of shaking a bag filled with salted ice and the sealed mixtures. Some of the ice creams turned out icier or more frozen than others, but even the kids who ended up drinking their mixtures said they enjoyed the experiment. The failed tests were a great opportunity for further talking about temperature, too.

In addition to having books with food science experiments available for the kiddos to check out as they left, I had two handouts they could take with them: one with the recipes from the program, and another with a Coloring with Foods activity from the American Chemical Society. And while I was in the program room cleaning up for a solid half hour after the program let out, my coworkers assured me that they heard nothing put positive comments from kids and their families as they checked out.

Science programming in the library: a fun, fascinating, and often zany experience for everyone!
Posted by Amy at 8:46 PM