It seems like almost every kiddo who walks into my library likes Star Wars. Our Star Wars books are always shelved on a special display, and it's a rare day we have more than five or six checked in for perusal. I'm always overhearing discussions about the films or tv show, and one fervent fan recommended I listen to the Star Wars Radio Drama that was on NPR a while back. These kiddos love Star Wars. So, this spring break, we gave them a Star Wars program. 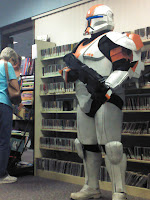 My library's Star Wars: Jedi Academy program was born of an article in the September 2011 issue of ALSConnect (now ALSC Matters!)--it gives tons of ideas for games and other activities to make any library's Star Wars program absolutely stellar. Using the rubric described there, we fleshed out our program to make it interesting to as many kiddos as possible.

Star Wars: Jedi Academy was a carnival-style program. It was advertised on our program calendar as an hour-long event for all ages, but we made sure to tell folks who registered that they could come and go as they pleased during that time frame. The program description invited young Jedis to come practice and perfect their Jedi skills through a variety of activities and stations. Our final program set-up included nine distinct areas: 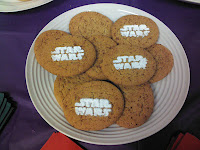 1. The Cantina -- We had small snacks available since the program took place at afternoon snack time. We used awesome cupcake stencils from Williams-Sonoma to decorate some of the platters of cookies.
2. Origami Yoda Table -- We had instructions on hand as well as lots of bright green cardstock and markers for drawing faces.
3. Coloring Table -- I printed off some big coloring pages I found by browsing online. Most popular were Chewbacca, Darth Vader, and R2-D2. (I was particularly proud of the sign I made for this station!) 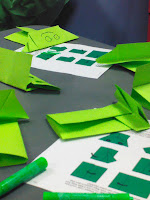 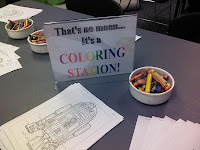 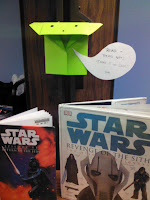 4. Jedi Library -- Every Star Wars book, DVD, and CD in my library that was available for check-out at the time of the program made it onto the shelves of the Jedi Library. By the end of the program, nothing was left.
5. Droid Toss -- I spray-painted and decorated some dollar-store trash bins to look as much like droids as possible, and kiddos tried to toss balls into as many as they could in four tries (a la Bozo Buckets). 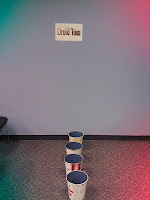 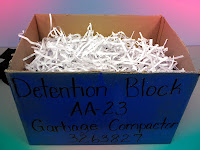 6. Garbage Compactor Dive -- An old deliveries box was decorated with the labeling of the garbage compactor in Episode IV, and it was filled with dollar-store party favor prizes and lots of shredded paper that we saved from the recycle bin. Each young Jedi was blindfolded, spun around a few times, and then entreated to use the Force to find a prize amidst all the "trash." 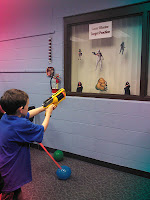 7. Laser Blaster Target Practice -- A co-worker laminated some images of notorious Star Wars bad guys, and they were stuck to a window on our program room wall. Kiddos used Nerf guns with suction ammo to practice their blaster skills.
8. Lightsaber Practice -- Young Jedis were pitted against one another as they attempted to keep a balloon afloat as long as possible using only a lightsaber.
9. Jedi Archives Trivia -- A very enthusiastic and knowledgeable teen volunteer created easy, medium, and difficult trivia to test the knowledge of young Jedis in attendance.

The last five stations, all games, were staffed by either library children's staff or teen volunteers. Each of those stations involved a prize--a piece of candy, a Lego Star Wars sticker, a paper Star Wars character medallion, or the prize from the garbage compactor.

Our program was also lucky enough to have some costumed visitors on hand. I had put in an appearance request with the 501st Legion, and we ended up with two Stormtroopers, one Clone Trooper, and one Jedi Master in attendance throughout the program. Lots of the kiddos had attended in costumes of their own, but the looks of awe and excitement upon seeing "real" Imperial Soldiers and a Jedi Master were absolutely wonderful. These guys were incredibly professional and friendly, too, posing for tons of pictures with kiddos and taking it in stride when a Nerf dart inevitably became stuck to one of their costumes. 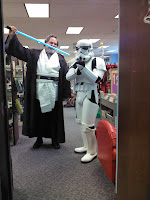 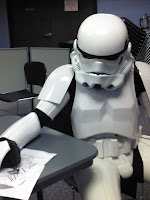 As excited as I was about offering the Star Wars: Jedi Academy program during spring break, I could not have anticipated just how popular it ultimately was. We had 170 people attend during the course of the hour-long event--parents mentioned that they had a hard time finding parking spots in our lot! Attendees were largely school-age with a handful of equally-excited preschoolers and teens (as well as some parents who were thrilled to share Star Wars with their kids in a new way!).

So many kiddos were beyond enthusiastic, and they've already been asking when the library will offer the program again. With all of the game supplies and decorations we have packed away in our storage room, I can happily say we'll have another Jedi Academy somewhere down the road.

Give this or a similar Star Wars program a try at your library, and may the Force be with you.
Posted by Amy at 12:49 PM