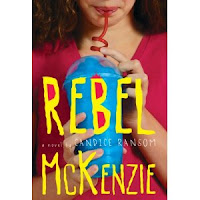 After she's caught running away to try to join the Ice Age Kids' Dig, future paleontologist Rebel McKenzie finds her summer plans turned entirely upside down. Her older sister Lynette is back in town toting her young son Rudy, and Rebel is sent to live with them for the summer--it's Rebel's job to look after Rudy while Lynette goes to beauty school. Rebel remains fixated on getting the money to go to the August Kids' Dig, and when she meets a bratty neighbor girl who brags about winning $500 in a beauty pageant, Rebel enters with her eyes on the prize.

Rebel and Rudy also befriend a few of their kinder neighbors, including Lacey Jane, a girl Rebel's age who enters the pageant as well, and Miss Odenia, an older woman who offers to train the girls for the pageant in exchange for their serving at her card parties. Throughout the summer, Rebel uses her keen skills of observation (essential for any paleontologist) to notice some of the living things around her for a change: she develops a friendship with Lacey Jane, starts to understand her older sister, and begins to see Rudy as more than just a nuisance. Everything leads up to the pageant itself, when it's up to Rebel to take the stage and decide who she really is.

I love Rebel's voice throughout this entire book. She is not always the most likable young girl which, in my opinion, makes for the perfect narrator for a book for pre-teen girls. Rebel struggles between going after what she wants with little concern for others--she thinks some mean thoughts at times--and realizing that the people around her might have wishes and goals that they care about just as much as she does her own. I loved seeing the feisty, whip-smart Rebel try to weave together her identities as goal-oriented future paleontologist (the Ice Age kind, not the dinosaur kind), defender of the downtrodden, and caring sister, aunt, and friend. Her evolution feels so true to what girls her age think and feel over the course of a few months, and it's always wonderful to see a strong female character come out on the other side just as strong as she starts out.

I also really enjoyed the bits between the chapters in this book--including some excerpts from Rebel's "field notes" from the summer, pictures drawn by Rudy, and pages from Lynette's cosmetology textbook. These snippets into the lives of the characters make the story that much more rich. I'll be recommending Rebel McKenzie to girls in the third- through sixth-grade range, and I'll also promote it for a Mark Twain Readers Award when it is eligible to be a nominee.