Racing the Moon by Alan Armstrong 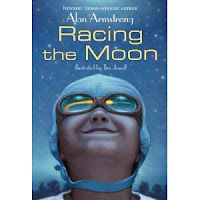 Eleven-year-old Alexis is growing up near Washington, D.C., in the years following WWII. The Cold War with the Russians is on lots of people's minds, but Alex and her brother Chuck are more interested in just one facet of the US/Russia conflict: the Space Race. Alex looks up to Chuck who, despite a propensity for doing things his own way (which occasionally involves disreputable behavior), fancies himself a student of everything related to one day going to space--radio, radar, rocketry, etc. Alex is fully involved in all of Chuck's adventures, and she strives to be an adventure-seeking woman like Amelia Earhart.

Alex and Chuck's dream starts to seem more possible when Captain Ebbs moves in down the street. Alex befriends her, and Ebbs begins sharing her stories of flight, what is necessary to theoretically put humans in space, and the rocketry work of Dr. Wernher von Braun (remember him in October Sky?). Both Alex and Chuck befriend Ebbs, and although Ebbs is skeptical of Chuck's methods and his sometimes negative influence on his sister, she takes them both under her wing. Their adventures culminate in a boating trip down the Potomac with the possibility of seeing a secret military facility rocket launch when they reach their destination. It is during this trip that we see both the true potential and the sincere motivations of our characters.

I really enjoyed the character of Alex--her thoughts and considerations about her family and the world around her ring true, and she is a believable young girl with a goal to get to space one day. Most of the other characters in the novel aren't quite as strongly sketched, but I don't think that fact detracts from the appeal that Alex and her adventures will have for young readers. The plot could be more even-paced and the ending not quite so hastily tied together, but the story works and will likely hold the attention of its audience.

This book also serves as a great addition to historical fiction set in the early Cold War--on numerous occasions Alex asserts that she wants to fly and go to space despite her mother's insistence that girls don't do those things. Seeing Alex strive to do what she loves despite her gender, as well as the strong female role model she finds in Ebbs, helps paint a picture for young readers of how gender norms were much more restricting than they likely experience today. I'll be recommending this book for readers third- through sixth-grade who are interested in historical fiction, space, and girls' adventure stories.