I'm in the midst of recapping a Winter/Spring 2014 Publisher Preview event I attended in mid-November; I'm sharing one book or series from each of the publishers who presented that I'm looking forward to sharing with readers. See also: Part I and Part II.

From Random House Children's Books: Lunch Lady and the Schoolwide Scuffle by Jarrett J. Krosoczka, January 2014
This final volume in the Lunch Lady graphic novel series looks to pack a punch, with the school's budget eliminating our fearless lunch lady's job just as her previous villains return en masse to attack the school. Can she save the day? 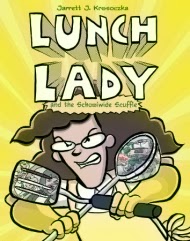 From Abdo: Star Trek series by Mike Johnson, September 2014
These original graphic novel stories pick up in the Star Trek universe where the recent movie, Into Darkness, left off, making them likely must-reads for young Trekkies. The series includes two separate stories in four volumes total: The Galileo Seven Parts 1 and 2, and Where No Man Has Gone Before Parts 1 and 2. 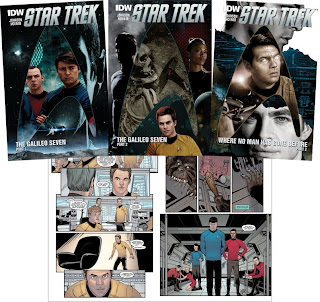 From Candlewick: President Taft is Stuck in the Bath by Mac Barnett, illustrated by Chris Van Dusen, March 2014
I've got a handful of elementary schoolers who are way into presidential trivia, and I cannot wait to share with them this sure-to-be-hilarious picture book about President Taft and his unfortunate bathtub mishap. Is the story apocryphal? Does it matter? 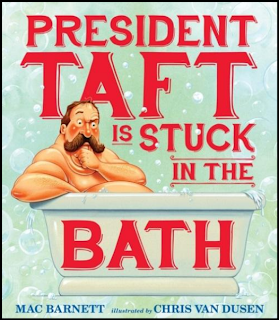 From Disney Hyperion: Dinosaur Vs. School by Bob Shea, June 2014
This latest installment in the adorable "Dinosaur Vs" series follows Dinosaur as he goes to school for the first time. I'm sure there will be plenty of roaring along with meeting the teacher, making new friends, and other common starting-school occurrences. This is a title I look forward to taking to preschool outreach.

From Charlesbridge: Feathers: Not Just for Flying by Melissa Stewart, illustrated by Sarah S. Brannen, February 2014
This picture book for elementary audiences looks to be both gorgeous and informative. Feathers have long been used for a variety of purposes, both aesthetic and otherwise, and this picture book looks perfect for readers eager to explore collections and natural objects. 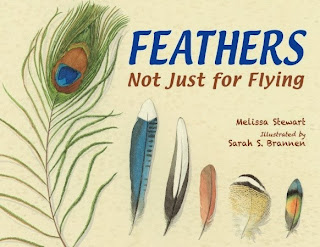 Look for Part IV, the final preview recap, next week!