The Composer is Dead! A Musical Unprogram Adventure

Ever since I first read/listened to Lemony Snicket's The Composer is Dead, I knew I wanted to one day use it in a program. In my mind, The Composer is Dead is on a level with Peter and the Wolf in terms of using narrative to introduce instruments in the orchestra. Better, even, because MURDER. It just so happens that this book fits well with the Unprogramming model that Marge and I have been chattering so much about as of late. Which is great, because who wants to spend a million years creating a program when you can make something truly engaging and fun in a much shorter amount of time? Here's what we did:

The Book Component: The Composer is Dead by Lemony Snicket 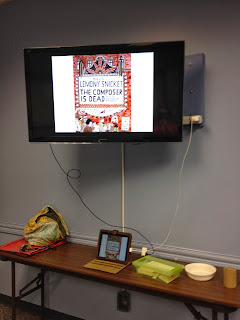 I read the story aloud, but I added peripheral elements that made the telling interactive and visual for the kids in the program. When kids entered the program, I passed out instrument cards on popsicle sticks. Each card showed a picture of an instrument featured in the story, its name, and the section to which is belongs (strings, woodwinds, brass, percussion). Then, each time a particular instrument or section was mentioned in the story, the children holding those cards would raise them up and shake them feverishly. I also put together a Prezi to accompany my reading; I mirrored the Prezi from my iPad to the HDTV in our program room, providing visual intrigue throughout and visual clues for what instruments were being featured.
Fun fact about sharing this story with kids: The kids loved the premise that the composer has been murdered, and every section of the orchestra must be questioned to find the culprit. Toward the end, when the grand joke of the whole book is revealed, there's a whole two-page spread on which composers are listed, then immediately proclaimed, "DEAD!" The kids got really into shouting "DEAD!" after I named the composers, and they were particularly amused to see portraits of these composers, too (Thank you, Biography in Context!). 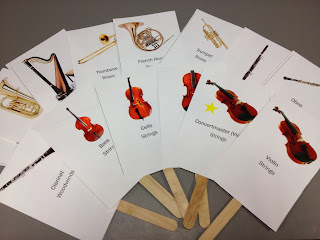 The Activities Component: The Orchestra app by Touch Press
We had just over a dozen children in this program, a perfect size for exploring this really great app together. This app allows you to find out more about individual instruments in the orchestra, including 360-degree views, interviews with players, orchestra excerpts, and sound samples. We explored one instrument from each section of the orchestra, making note of the different ways things are played (buzzing like brass players was a particular favorite activity). We also tried to figure out the instrument that can play the lowest note, and the instrument that can play the highest. Favorite instrument sound for this group: the tam tam.
We finished this activity by watching and listening to part of a performance of an orchestral piece. These performances show, in real time: the score, so we talked about reading music; panning clips of different instruments when they were featured in the piece; constant video of the conductor; and a great illustration showing dots for every player in the orchestra, with the dots expanding whenever a particular player plays. That illustration was particularly captivating to several of the kids. 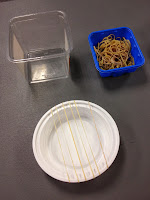 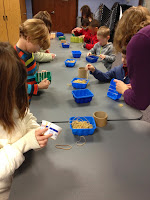 Explore!: Make rubber band instruments
I brought all sorts of recycled plastic and cardboard containers into the program, as well as tons of rubber bands (which are always in large supply at the library). After demonstrating my own rubber band instrument, and showing how tightening or loosening the tension in the rubber band can change the sound, the children go to work on creating their own instruments.
We wrapped everything up with a short rubber band orchestra performance, which garnered rather a lot of applause from the attending caregivers. (They may have just been happy that rubber band instruments are quieter than that time we all made homemade kazoos, which are loud.)

Take things home: I put out other Lemony Snicket books, some nonfiction about music and instruments, and a few orchestral CDs. Several parents asked me about The Orchestra app, as a few of the kids stayed after the program to try out a few more instruments on it.

I was incredibly pleased with this unprogram. The kids enjoyed the longer story, they got into instruments and making their own music, and overall we enjoyed an evening of culture at the library on a cold night. Lemony Snicket may say something sarcastic here about the program, but I was pretty proud of it.