Starting a few years back, when the teen services department was just getting up and running in my library district, my branch's teen person decided to offer an Iron Chef-themed program for teens. Since then, Iron Chef and other food competition-style programs have been surefire hits when part of our teen programming schedule. This summer, I helped my branch's main teen staffer put on just such a program: Cupcake Wars. Here's what we did:

The Preparations: My colleague and I prepared the program room for the competition by setting out all our tables, covering them with tablecloths, and setting out individual work stations complete with paper plates, plastic utensils, and rubber gloves (a necessity for a program in which customers are handling food). We also set out a pretty impressive table of supplies; in addition to the cupcakes, there were a variety of icings, candies, fruits, and odd items (Chex mix, bacon bits) available for the competing chefs to use in their creations. Preparations also included pre-ordering un-iced cupcakes from our local grocery store and picking them up before the program. 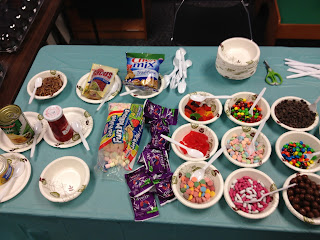 The Challenge: Once teens had arrived for the program and made their way to the work stations, we shared the rules of the event. Each teen would be working individually (sometimes teens work in pairs or teams, but we had enough supplies for a solo competition this time around). The challenge was to choose a book--any book--and create a cupcake creation somehow inspired by or related to that book. Each teen had three cupcakes with which to work, and each teen could use only four additional types of food items from the supplies table. Final creations would be judged by peers on appearance and fidelity to book inspiration, and a panel of official judges (staff and a designated teen participant) would also judge based on appearance and taste.

The Competition: Once rules were explained and questions answered, teens went to the supplies table a few at a time to gather their ingredients. To avoid total supply-grabbing chaos, we had teens head to the supplies based on birth month. Once supplies were in hand, teens had a total of about 30 minutes to work their cupcake magic. They could return to the supplies table for additional quantities of any of the original four supplies they had chosen.

The Twist: What's a cooking competition without a twist? With five minutes of work time left, we announced that each chef could add a fifth food element to their creations. Cue the run on the supplies table. (My favorite was the boy who chose Chex mix as his fifth element, not because he wanted to add it to his cupcake but because he was hungry.)

The Peer Judging: When work time had elapsed, teen chefs were instructed to put down their materials and plate their best cupcake to be judged. Each teen was then given two popsicle sticks. These popsicle sticks were used to cast peer votes; each teen had two votes, and each teen could only vote for his or her own creation once. Teens were instructed to look at all the creations in the room and then cast their votes based on best appearance and best fidelity to book inspiration. These votes were then tallied while teens ate one of their other cupcakes.

The Official Judging: One by one, each teen brought his or her formally plated cupcake to the judge's table for presentation. Teen chefs were asked about their book inspiration and how that translated into their cupcake creation. Judges sliced into each cupcake and tried a small piece for taste.

The Awards: After tallying peer votes and conferring over appearance and taste, the official judges announced four winning cupcakes: the top two peer-voted creations, the tastiest book-to-cupcake interpretation, and the most daring cupcake. Our peer-voted winners were a cupcake based on The Maze and one based on I'd Tell You I Love You But Then I'd Have to Kill You. The tastiest went to the cupcake inspired by The Sin-Eater's Confession, and the most daring was definitely the cupcake based on Alice's Adventures in Wonderland (yes, that's marshmallow fluff with bacon bits that you see; not particularly tasty). Each of these four winners posed with their creations before being awarded a rather large, fancy, store-bought cupcake. All participants were able to choose an ARC or leftover summer reading prize book as well just for participating, so everyone left happy.

We've hosted a number of Iron Chef and Cupcake Wars programs in the past, and interestingly, they tend to attract lots of teens who don't normally frequent library programs. We're not quite sure why this program is so much more appealing to these library-lite teens; have you had any experience with this phenomenon, and to what do you attribute it?

Also, any plans to offer a food competition program? Let me tell you, hosting a snacks-themed challenge around the Super Bowl is always a hit.