Not too long ago, librarian Kary Henry tweeted that she had just hosted a successful unprogram. She shared a few details on Twitter, and I knew immediately that we'd all benefit from hearing more about this program. Without further ado, here's guest blogger Kary Henry! 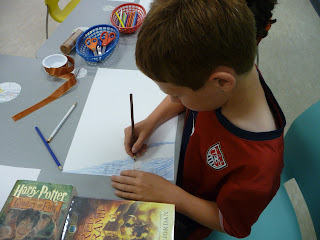 When I first heard of Marge Loch-Wouters’s and Amy Koester’s Unprogramming approach, my first reaction was “What? Let go of control? No way!” I’m the ultimate control freak (although I prefer the term “thorough planner”), and their idea just didn’t fit my preconceived notion of programming. But, like most brilliant ideas, it wouldn’t let go of me. I kept coming back to phrases from their first two blogs on the topic: “We spend a lot of time and energy in planning” and “You never know just how many kids will participate.” Marge and Amy talked about stress, and I remembered past programs where I had Every. Single. Minute. scheduled, and then I either had low turnout or, worse, no turnout! I decided to take that leap of faith and do my “Fantasy Maps” program as an Unprogram. And, as Amy wrote, “EUREKA!”

My daughters and I used to create “fairy maps” when they were little. That effort consisted of nothing more than going for a walk to gather twigs, pebbles, and fallen flower petals. Lots of glue on a piece of heavy paper, crayon-inscribed labels to identify the Rose Fairy’s house or other key features, and everyone was happy. I would use that same low-key, unprogramming approach to Fantasy Maps, a school-age program I had designed for our Summer Reading Program theme of “Have Books – Will Travel!”

Now if I’m totally honest with you (and myself), I had indeed been thinking about this program since February. I had gathered some important information about cartography, emailed another librarian in Illinois who was running a similar event, and put a good deal of thought into what I wanted to do. But the Unprogramming approach saved me from myself and allowed me the freedom to put the focus into what the kids wanted to do! (Slap self on head and mutter, “Duh.”)

The décor consisted of maps of fantasy books/worlds that I had located on Pinterest and other websites: Oz, Narnia, the worlds of Harry Potter, etc. I gathered some books on mapmaking along with fictional titles that had maps on endpapers and displayed those on the counter. The laptop and projector were set to run National Geographic’s Interactive map website.

Supplies were purchased at a local craft store or found in our cabinets: silk flower petals, aluminum foil, craft sticks, colored pencils and markers, ribbons, colored pebbles, Bristol board, and good glue. Total cost for the program was under $30!

When the children arrived, we talked for a few minutes about what a map is, why we use them, parts of a map (scale, legend, compass rose, color), and how a fantasy map can be based on a book or of a world in their own imaginations. We mapped Deerfield using the National Geographic website, and they were excited to put their homes, schools and, of course, the Library on the map. Less than 15 minutes in to the program, I let them loose with a piece of Bristol board each and the above supplies. 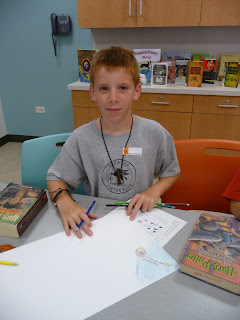 The conversations as my teen volunteers and I walked around the room were wonderful – discussions about what was important to include on a map of Harry Potter or how to combine HP with the world of Rick Riordan, even how best to make a pirate ship out of cut-up craft sticks and a bit of ribbon. Some children chose to use the supplies to create relief maps; others used the colored pencils and markers only. The kids were excited and proud to pose with their maps. Forty-five minutes later, as the adults returned, their children didn’t want to leave!

My first attempt at an Unprogram had been just as Marge and Amy hinted it would be: relaxed, kid-focused, and wildly successful. I’m already looking at how to continue to use this approach in future events and in my early literacy storytime sessions. For me, Unprogramming has become the ultimate in programming!

Kary Henry is a Youth Services Associate at the Deerfield (IL) Public Library. She coordinates the Library’s preschool outreach and runs the 4-5 year old early literacy storytimes. She can be reached at khenry(at)deerfieldlibrary(dot)org and @MissKaryReads on Twitter.