School has started up again 'round these parts, so I wasn't sure what sort of a crowd to expect for my August Milk & Cookies Story Morning. Are families recovering from the school-induced sleep schedule shift, or are they looking for things to do as a family on the weekend? Seeing as I had the largest crowd at this Saturday morning program since I started it in the spring, I'd say folks were falling into the latter category. Our big group, a combination of new and familiar faces, enjoyed a rousing program: 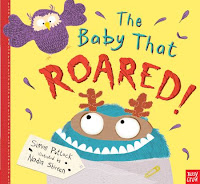 Story: The Baby That Roared! by Simon Puttock
This story about a deer couple who adopt a baby (who turns out to be a monster) is both funny and sweet. Okay, there's a big, two-page spread burp in there, so it's mostly funny. It's a slightly longer tale, but the way the pictures are laid out allows plenty of opportunity for getting the kids to interact and think about what they see on the page.

Song: "The Monster Boogie" from Laurie Berkner
Nothing quite wakes up a body in the a.m. like marching around the room with monster claws ready, teeth bared, and roaring. That's what we did, and the fun, interactive song really got all of the kids moving.

Song: "I Know a Chicken" by Laurie Berkner
This is one of my favorite egg shaker songs, as evidenced by the fact that I use it in many different program scenarios. Kids get excited as soon as they hear me grab the bag of egg shakers, and older preschoolers get really into trying to shake their eggs in the different ways the song suggests. Younger kids have fun figuring out how the shakers make noise, then put that knowledge to work.

App: Where is My Baby? by Simms Taback, from CJ Educations
I used this app more like a picture walk interlude than a start-to-finish story--that's the mood my kiddos were in, and this app's setup obliges. Using the images from the app, which were projected on our large tv screen, I asked what animal was looking for her baby. Then the children guessed where the baby might be before I touched the iPad screen to bring the baby into view. Everyone chimed in making the appropriate animal sounds. This app might not have held the whole group's attention had I used it in its full form, but it definitely kept kids interested and engaged for four rounds of animals.

Song: "If You're Happy and You Know It"
A roll of our song cube told us we'd be singing this song, and I pulled out my ukulele to accompany our singing, clapping, stomping, and hooray-ing. Pretty much every kid was up and dancing.

Story: Henny-Penny
I told the story of Henny-Penny, and I encouraged children to chime in on the refrain of "The sky is falling!" Many of them did join in, but as our large group began to get restless, I left off a few animals in my telling to speed along the resolution. I had books with Henny-Penny's story available for check-out, so kids who got really into the story could take the full version home.

Milk and Cookies Time!
This month's cookies were Trader Joe's Cinnamon Schoolbook Cookies, small cookies cut in the shapes of letters and numbers. As I passed out a few cookies to each child, I encouraged them to figure out what letters and numbers they had on their napkins. Quite a few children were excited to find they had the first letter of their names.

Free Play Time
August's free play session would probably rank as the best so far in terms of engagement by pretty much everyone in the room. Caregivers were down at the play tables with their kids (and other kids, too) asking questions, helping put together monsters, demonstrating our magnet wands, and assisting with shape puzzles. With so many kids in the room, it seemed like the children were more comfortable interacting with their peers than in months past. There was a core group of hard-core players, too, who stayed almost 45 minutes after the story time portion of the program to let their imaginations run free. I'm currently reading Vivian Gussin Paley's A Child's Work: The Importance of Fantasy Play for the Storytime Underground Book Club, and it was very exciting for me to see my library kids engaging in that sort of fantasy play at the program. I very much want our library to present ample opportunities for this vital developmental practice.