I've seen several blog posts from librarians who have offered life-size Candy Land programs for their preschoolers. As whimsical as these programs looked, I must admit I found the idea of transforming my library's multi-purpose meeting room entirely into Candy Land--then immediately tearing it down before the evening's homeowners association meeting--incredibly daunting. The idea of a life-size game really stuck with me, however, and I put it in my Google doc of back-burner ideas.

I finally figured out a life-size game that made sense to an unprogramming-inclined librarian like me: Chutes and Ladders! The game is a classic for kids, it's pretty self explanatory, and it doesn't require its own world for real enjoyment. Earlier this week, I offered our Life-Size Chutes and Ladders program to school-age kids in my library. We had a dozen kids participate--a perfect number for a first go at a life-size game. Here's what we did.

Room setup - With help from a page, I moved the tables to the back of our meeting room. With chairs along the walls for spectating caregivers, the bulk of the floorspace was wide open. I grabbed stacks of construction paper in red, yellow, green, and blue, as well as a roll of book tape, some yarn, and a roll of electrical tape. I used book tape on the back of construction paper to make the game board path. Chutes were made of yarn and connected two colored spaces on the board. Ladders were made out of electrical tape, and they also connected two colored spaces on the board. I set up the game board with 50 colored spaces, 4 chutes, and 4 ladders to start. (If you anticipate a bunch of kids or want shorter gameplay, decrease the number of spaces on the board.) I also set out a table with some of our books with kids' games. 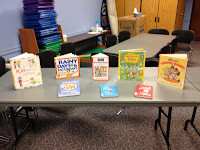 How to play - As kids came into the program, I had them make name signs for themselves. Each sign had a number, starting with 1, and I asked the kids to wear their signs around their necks with the assistance of yarn and a hole punch. The numbers were so I could make sure everyone took turns in order. On a child's turn, he or she would spin a game spinner borrowed from Twister; the Twister spinner has each of the four game colors on it, and it told the child what game space to move to. If he landed on red, he moved to the next red space. If she landed on green, she moved to the next green space. Once on their new spaces, the kids looked to see if they found themselves on a chute or a ladder. If they did, they moved accordingly. Finishing the game meant spinning a color no longer left in front of you.

Keeping the game going - With a dozen kids all starting from the same space, the game was a big congested at first. After about three rounds of turns, though, the human game pieces were really starting to spread out. Everyone was a good sport about chutes (even the boy who repeatedly said, and I quote: "This is the worst day ever!"*), and ladders were very exciting. That said, it took about 30 minutes of gameplay before the first child finished the course. That child got to choose a book from a prize cart and then start back at the beginning. I also took this half-way point opportunity to do a few things: 1) tell the kids to stay on their squares, then give everyone a roll of Smarties for a Smarties break; 2) talk about how game designers test their games over and over again to make sure it's not too easy and not too hard; and 3) remove a chute and add a few ladders. We kept playing after the Smarties break, and as other children finished the course, I kept removing chutes and adding ladders. These modifications really excited the kids--where would there be a new ladder?!?--and also served to help move the game forward. By the time our hour for the program was up, every child had successfully finished the course and chosen a prize book to take home.

How it went - The Life-Size Chutes and Ladders game went really well. Kids stayed engaged throughout the process, and they didn't grumble about waiting their turns or sliding down a chute. They were all really excited to be able to make it to the end of the course, which kept them all motivated and engaged. Caregivers were into the whole experience, too, because the game was very low-key. There was no single winner, and thus no competition to sour attitudes or fighting to get loud. One caregiver even pointed out how the whole game was a sort of exercise in patience and delayed gratification, all wrapped up in a gameplay bow. Children were genuinely excited to see what their spins would dictate, and they relished choosing their books at the end.

If you want to do this program... I highly recommend it! I would encourage you to think about a balance between number of participants and length of the program; this program worked well for us with around a dozen kids so everyone stayed engaged over the course of the hour. I'd also encourage you to be very flexible with the chutes and ladders you create--having a free hand with adding and removing them during the game can help move things along nicely. Lastly, never underestimate the power of books as prizes. Use those leftovers from the summer reading game, or galleys, or whatever you've got--going home with a book to keep is golden.


*His mom told me he says that about at least three different things each day. When he finished Chutes & Ladders, he appropriately switched to saying it was the "best day ever!"