November marks my ninth monthly Saturday morning Milk & Cookies Story Morning, and the program looks to have developed quite a following. Month after month, I see a combination of familiar faces who express total excitement at the prospect of story time. I also continue to see plenty of new faces, usually accompanied by caregivers who tell me how grateful they are to have a Saturday library program option for their little ones. When I was in library school, one of my professors advised that any new program should be given at least a 6-month trial before deeming it successful or not; nine months in to Milk & Cookies Story Morning, I feel I can start to say that this program is something much needed and appreciated by the community I aim to serve. 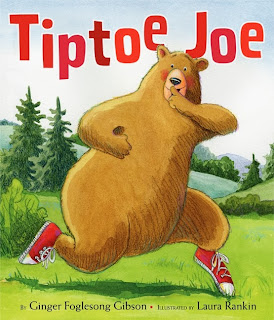 Story: Tiptoe Joe by Ginger Foglesong Gibson, illustrations by Laura Rankin
This simple rhyming story invites audience participation, so we all stood up to follow Joe, a bear, as he tiptoed through the forest to share a secret with his friends. Page turns bring a new animal to identify, including a fun sound for the animal's footfalls. These animal sounds just beg to be acted out, and the kiddos are happy to oblige. Discovering Joe's secret at the end of the story doesn't fail to delight, either. Give kids some space to stand up and have their feet make different sounds when you read this one--a perfect opportunity for play.

Song: "Bluegrass Jamboree" by Hap Palmer
Since we were already standing for the preceding story, we kept standing up to dance along to this song. It includes simple, fun actions as the song lyrics, and the strong beat of the song helps pump up enthusiasm.

Song: "I Can Shake My Shaker Egg" by Mr. Eric and Mr. Michael
After passing out shaker eggs, I explained to the kiddos that we would try to shake our eggs along to the beat of the song--if the song was slow, we would shake slow; and if the song was fast, we would shake fast. The dramatic increase in tempo of this song set to a classical music staple provides a perfect background for reinforcing rhythm.

Story: There's Something in My Attic by Mercer Mayer
Before I started this story, we talked about a few things. First, where in a house is an attic? Did anyone in attendance have an attic at their houses? We also talked about how things can happen in stories that cannot happen in real life. When I've got some younger kids in a program in which we're going to read a story that might be interpreted as scary, I always talk about how these stories are made up and that pretend things can only happen inside the pages. By the time we got to the end of the story, kids were twirling their pretend lassos with nary a nightmare fear in sight.

Song: "Five Little Ducks"
Our song cube landed with the illustration of five ducks facing upward, which meant we would sing "Five Little Ducks." We all practiced showing numbers on our fingers, and we had great fun making big, huge quacking noises to bring the little ducks back home. 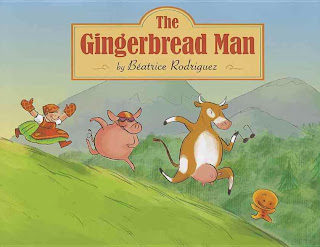 Story: The Gingerbread Man by Beatrice Rodriguez
The simple, sometimes-silly illustrations in this version of The Gingerbread Man are quite delightful lend plenty of opportunity to talking about the pictures. Most of my attendees had not heard this folktale before--a fact that doesn't shock me as much as it used to, that kids aren't familiar with classic tales. By the end of our reading, though, they were reciting the refrain with me like pros. I've said it before, and I'll say it again: these folktales are classics for a reason, and their pacing and building of suspense are often exquisite. That, combined with the fact that kids need a basic knowledge of these tales to understand many, many things in life, is why I always strive to include a folktale when I can.

Rhyme: "Five Little Monkeys Sitting in a Tree"
Together, we sang and told the story of the five monkeys in the tree and the alligator using Marge's terrific sign language version. Even the younger kids in the group caught along on several of the signs, and the excitement of seeing that alligator's jaws open wide was quite thrilling.

Milk and Cookies Time!
We enjoyed Teddy Grahams and either 2% milk or 100% apple juice. I've learned to pour just a bit of drink in each cup to start in order to minimize both spills and waste.

Free Play Time
Our four play stations for the day took advantage of the early literacy play kits currently residing at my branch for November. In addition to our perennial favorite wooden garage-and-cars station, we had foam building blocks; play fruit that can be slices with a play knife, a pencil, or other thin implements; and a variety of magnets (alphabet, dinosaurs, vehicles, animals) with magnetic boards. This variety of play items worked well with the age range of attendees. While younger kids veered toward the blocks and garages, older ones sliced and matched fruit and vegetables or created their own magnetic stories. I was lucky enough to get private readings of a number of these stories, and they were extremely well plotted.