Readalikes for Out of My Mind, 2012-2013 Mark Twain Readers Award Winner 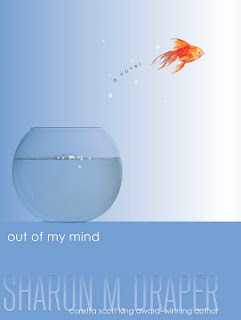 A few weeks ago, the winners of the Missouri Readers Awards were announced. I was thrilled to learn that the 2012-2013 Mark Twain Readers Award, chosen by fourth through sixth graders, was given to Sharon M. Draper's Out of My Mind.

During the course of this school year, I've had lots of eager middle grade readers come talk to me about the books they were reading and enjoying, and Out of My Mind seemed to always be part of the conversation. And rightly so--this story beautifully illustrates that people are people, despite any appearances or differing levels of ability. We all want friendships, to learn and be challenged, to feel love and appreciation from our families... Simply, we're all human and want to be treated humanely, lovingly. I am ecstatic that young Missouri readers latched on to that message. 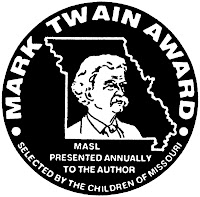 I've already had a number of kids come ask me for more books like Out of My Mind, and I anticipate many such requests over the next few weeks and into summer reading. To meet that demand--and to help my reference colleagues who don't have as much familiarity with MG titles--I have put together a list of readalikes for Out of My Mind. Brief explanations included.

Readalikes for Out of My Mind by Sharon M. Draper, 2012-2013 Mark Twain Readers Award Winner

Mockingbird by Kathryn Erskine -- Told from the perspective of a young girl with an ASD, this story wonderfully shows how every person must process difficult feelings and situations in life. How we interact with the world may differ, but we're all still very much a part of it.

Wonder by R.J. Palacio -- This novel cannot help but inspire children to be their best selves as it follows Auggie and his classmates on his first foray into a school setting. Like Melody in Out of My Mind, Auggie's special need is visually apparent. This story is told from multiple perspectives, and message that we all want a fair chance at being ourselves rings true. 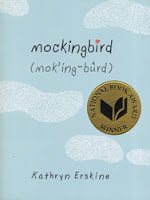 Rules by Cynthia Lord -- This slightly older title is a bit different in that it is the protagonist's younger brother who experiences life with a special need, but the impact of the protagonist's story is no less profound.

The Joey Pigza Series by Jack Gantos -- Many a reader has fallen in love with the disheveled and energetic Joey Pigza who, when it comes down to it, unabashedly lives his life the way he knows how. Gotta respect that.

The Origami Yoda Series by Tom Angleberger -- Another example of novels told from multiple perspectives, this series subtly demonstrates that we're all different, no exceptions. One kid may be labeled the geek, another the weird one, another the bad attitude kid; but while these differences may distinguish us, they do not define us. There are so many characters in these books for kids to love and commiserate with.

What titles would you add to this readalike list? What books won state awards this year in your neck of the woods? What sorts of quick readalike lists, if any, will you prepare for summer reading?