Milk & Cookies Story Morning, Take 2: In which we learn the word "encore" 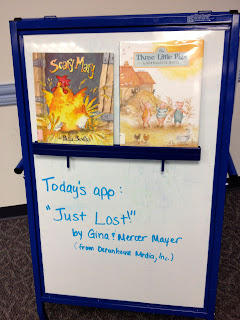 I blogged earlier this month about a new story time program I began offering in March, a Saturday morning Milk & Cookies Story Morning. My main impetus for this new program format and time was better fitting into the schedules of families who can't necessarily make a weekday story time. So far, I'd say it looks like I'm going to be successful on that front: I was averaging about 6 attendees at my previous Evening Family Story Times; the debut M&C Story Time drew in 17 people; and April's M&C Story Time had 36 people attend. Those are big jumps, and our Saturday morning story times are seeing lots of new faces. I love programs that invite new library users.

A few other goals of my Milk & Cookies Story Morning, which of course will continue to develop as the months go on:

The April Milk & Cookies Story Time was an encore program of sorts, the second time I offered the new program time and format. As encores go, I would consider it a rousing success. Here's what we did:

Story: Scary Mary by Paula Bowles
This story invites lots of open-ended questions about the pictures, what's happening in the story, and the topic of making friends. It also provides great opportunities for making animal noises and motions, a huge bonus for kids' morning energy. 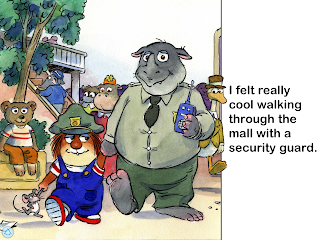 Book App: Just Lost! by Gina and Mercer Mayer from Oceanhouse Media, Inc.
This wonderful Little Critter story follows Little Critter as he gets separated from his mom and siblings at the mall. Oh, no! he thinks; My mom is lost! The story follows Little Critter as he resolves to be brave, tells a grown-up that his mom is lost, and spends a little bit of time amazed at the mall security office before being reunited with his family. As I shared the book app with the audience (it was mirrored on our HDTV), I asked questions about what the kids could see in the pictures, what they thought would happen next, what they would do if their mom or dad got lost. I'll admit I was initially unsure if this app would be too long for the kids' attention spans, but they were totally engaged in the story. They even wanted to share their own lost stories after we were done. Once again, I was blown away by the literacy potential of sharing an app with kids in an intentional and interactive way.

Song: "We Are the Dinosaurs" by The Laurie Berkner Band
We had a dinosaur marching parade of sorts for this song, with many of the children opting to join the main group in a marching dino circle. A few stayed on the sidelines with their caregivers, but they were definitely stomping their feet and doing the other actions with the music.

Story: The Three Little Pigs by Bernadette Watts
This version of the Three Pigs story offers a great intro for new listeners, with great illustrations that can get kids talking about what's happening. The wolf doesn't get cooked in the end of this version, so if that's the tale you want to tell, there are other options.

Activity: Parachute Play
I got the parachute out of the bag, and I threw on top of it three beach ball-style globes. The exercise of having fun with the parachute while trying to keep the globes on it was a great activity for concepts of teamwork. 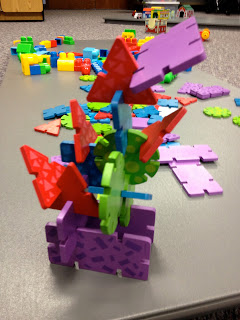 Milk & Cookies Time!
This time we had Nilla Wafers, 2% milk, and lemonade. One mother brought her own snacks for her kids due to food allergies, and I was so glad her children were able to participate in that portion of the program.

Free Play
I got out three tables' worth of toys again, ranging from wooden garages and cars to counting cookies and building materials. This is the portion of the program that I am most excited about--it offers great opportunities for me to interact with each child, and I can also model behavior for interacting with children as they play. This is also the time in the program when grownups can have conversations, and many of them seek out conversations with me. They ask about great apps, what programs we have coming up, what else the library offers... really, the PR potential of this free time is amazing. And all while the kids are exploring the world through free play.

I know at least one other librarian, Angela in Nova Scotia, has adapted this program format for her own library customers and goals; see her version here. Anyone else including apps in programming? Offering weekend story time options? Focusing on building kids' knowledge of folk tales? I'd love to hear what you're doing.