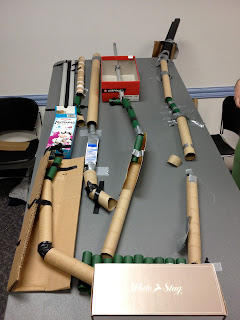 Today's guest post comes from Miss Melanie, a children's staffer at my library. She is sharing a terrifically fun and engaging STEAM program that she offered during our school district's spring break. Take it away, Miss Melanie!

My idea for a recent children’s Science Technology Engineering Arts Mathematics (STEAM) library program evolved after cleaning up from a Time for Twos program and pondering the “likes” of children. In tipping a long table on its end, a toy train engine left by a child zoomed down the table and crashed to the floor. I couldn’t resist. I did it again. Tip, roll, crash. Tip, roll, crash. Fun! I remember thinking, I can use this, and tucked it away in the recesses of my brain.

Weeks later I’m pondering what type of program will accomplish STEAM goals with 20+ rambunctious children during their spring break. Call me a geek, but I will sometimes web diagram my thoughts. Speed, tape, movement, tubes, building, create, pipe cleaners, noise, and cutting were just some of the many words I wrote on my web. What would my own kids like? Aha! The Marble Run Mania idea was born.

With supportive co-workers who will collect anything for me, one trip to Leftovers, Etc. (a not-for-profit creative and educational resource facility), and a few consumables (electrical and duct tape, pipe cleaners) the program was literally ready to roll...out the marbles. 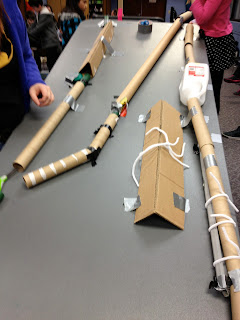 On the day of the event, I displayed all the possible products collected for building marble runs. I placed three long tables end to end, piled with recyclables: paper towel/gift wrapping and paper/plastic/pvc tubes; egg cartons, binder clips, pipe cleaners, milk jugs with holes in the bottoms, detergent lids; and some unusual parts of things like the broken frame around a felt board, creating a straight track. Anticipating around 30 kids, I set up six stations by tipping six tables. One set of legs was resting on the floor; the other set was placed in two chairs to create a slant. Remember the train zooming down the table? Voila! Our marble runs would be constructed against the slanted table top so the force of gravity would be in our favor. Each group was allotted a supply of tape, scissors, and other consumables.

As the children entered the room, a teen volunteer handed them a shoebox with a marble in it. I wanted to get the “juices” flowing for the project so I prompted the children with several questions: Keeping the marble in the box, what can you do with it? See how it rolls? What makes it roll? Can you make it touch all four sides with and without it rolling along the edges of the box? What else can you do with it?

Once the majority of the group arrived, I polled them for their background knowledge of marble runs. To create our own runs, I demonstrated how we would use the slanted tables to assist us with creating a run to finalize at an end point. I used duct tape to tape a paper towel tube to the table to show the marble running through it. What is a deflector and what does it do? What recyclables would make a good deflector? 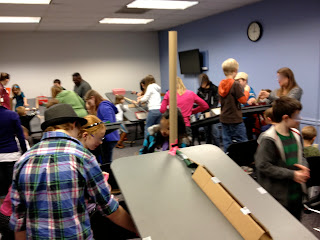 The kids were divided into groups roughly by age unless they came as their own group. To provide some structure and a starting point, I suggested they start at the highest point of their table and choose something the marble could shoot through. Paper towel rolls were the first to go, and kids got the hang of the taping quite quickly. Back and forth to the product tables they went, choosing just the right object for the next link in their run. Teen volunteers assisted with tape ripping, holding parts in place, and making themselves available on all fronts. They did an excellent job of allowing the youths to create and implement without overtaking the project. I asked the teens to prompt kids with open-ended questions if the kids fell stuck on a part. Again, the teen volunteers were found encouraging and asking, "What would work best next?"

While navigating around the room, I incorporated as many scientific terms as I could into their building process without sounding preachy. "I see you chose the milk jug lid as a deflector. The marble richochets into the tube. Cool. What happens when you add another deflector? Tell me about this part. I see the marble runs slowly through that part? Why? What would increase the speed of the marble?" I used terms such as gravity, weight, launch, roll, bump, drop, bounce, heavy, and force. I was genuinely interested in their processes.

Many groups found challenges along the way. Why won’t the marble go through? Was the opening too small? Was there an obstruction? Was tape sticking to the marble? The tape won’t work. They aligned tunnels, made long drops, plunked marbles, re-aligned, and finally--success! Some decided to add on or make another branch to the run. Others made a whole new run next to the original.

The diversity of the marble runs was amazing. One child continued to attach paper towel tubes together well past his own station and into the next. Some, with the help of a parent, made various chambers like in pinball machines. Tape was used in abundance. 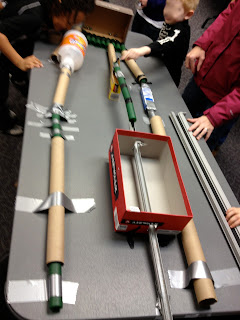 We spent the last minutes eagerly making our way around the room trying each other’s marble runs. Kids whose parents hadn’t been building with them proudly gave their parents marbles to drop down lengthy chutes, explaining what they did and watching the marble finally plop into the end container.

The final attendance count was 58, and overall I was pleased with the results of the build. I will modify a few things for next time: prior to the build, I’ll have the teen volunteers build a marble run made of completely different materials than what the kids will be building with; providing more types of tubing materials; and starting my collecting earlier. Also, dismantling runs at the end by the teen volunteers and myself was time consuming, but well worth the effort. We were able to salvage some things... to be used for the next builds. I’d also inspire groups to create a name for their building teams and to create a name for their marble run. I can’t wait to do this again!