After I read two great 2012 middle grade novels featuring spies as a theme, I decided I needed to offer a Spy Club program at my library. After a bit of planning and recruiting teen volunteers, we offered the program to great success last week. Here's what we did:

When the program room doors opened, kids were able to find a seat at a table set out of with supplies for creating disguises. No spy is ready for duty without an assortment of disguises, right? The end results of this station were varied, with some kids donning monocles and handlebar mustaches while others were rocking multicolor glasses and beauty spots that were really communication devices. 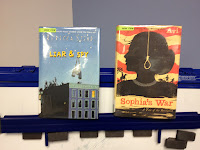 During the disguise creation, I book talked two of the books that inspired the program theme: Sophia's War by Avi and Liar & Spy by Rebecca Stead. I emphasized that there are books with spies for all readers; these two books represent realistic fiction and historical fiction. Both were checked out after the program, as were a number of other spy-themed books we'd pulled for display in the program.

Once disguises were in place, kiddos were able to rotate among four spy skills stations: 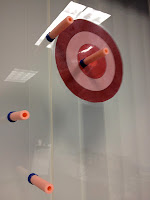 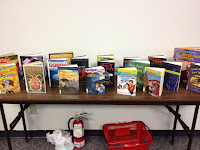 With just a few minutes left in the program, I announced that spies should be finishing up at their current stations. We ended with a reminder that books were available for check-out; both fiction and non-fiction accounts of spies went like hot cakes. Lots of children were spotted leaving the library in disguise, too--an indicator, I think, that they'd enjoyed themselves.
Posted by Amy at 4:00 AM