My favorite sound bites from #yalit12 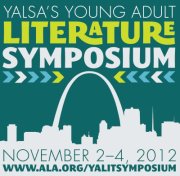 I spent the weekend at YALSA's Young Adult Literature Symposium in St. Louis. The general premise for the conference was the future of YA literature, and the programs and panel speakers really helped attendees to look forward to what's coming and explore ideas for innovating and adapting our services. I've got plenty of session info circulating in my brain right now, and I'll be chatting with my teen person on Wednesday regarding her thoughts on the conference. I don't want to share too much until after we've talked, but I do want to whet your appetite with three of my favorite sound bites from the conference. Without further ado...

"Readers will be the upstanders, not the bystanders." --Patricia McCormick
Reading is a powerful thing, what with its capacity to introduce us to new ideas, places, and people. Readers are the ones who are informed, who have a more diverse worldview, who have empathy for others they might not know but have seen in the pages of beloved books. And so readers are the ones who will stand up for what is right in the world. Teens absolutely get behind this sentiment.

"Great books for teens serve as a mirror and a window." --David Levithan
Books help us explore aspects of ourselves that we might otherwise have difficulty recognizing or admitting--they act as mirrors for seeing who we are as people. Books also act as windows, allowing us to see what the world is like for others. Levithan shared an anecdote about a librarian who said she wasn't going to buy a book with a multicultural protagonist because she didn't have any "ethnic" readers. All the more reason to have that book.

"Teens are multidisciplinary beings." --Scott Westerfeld
Teens have two jobs: to attend school and to grow up. Going to school means a variety of courses, and so the very nature of teenage existence is multidisciplinary, with exposure to and interest in multiple subjects. One of the great things about good YA literature is that it taps into that multidisciplinarity. Genres blur, topics overlap...and readers love it because it reflects the world they inhabit, which does not have such precise delineations that adult fiction often seeks to reinforce. Teens love to read varied books, and to vary their reading.

Come back later this week for discussion of some of the ideas I brought home from #yalit12.
Posted by Amy at 4:00 AM