A Reflection on the Importance of Talk 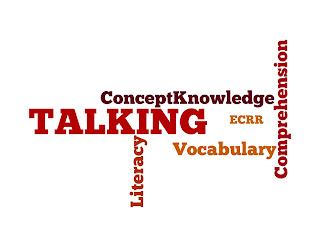 One of my favorite things to come out of the revised Every Child Ready to Read is the emphasis on talking to and with young children. Hearing and engaging in talk helps children to develop a sense of the rhythm of fluent speech. Talking about objects in the world around us and pictures in a story help to build vocabulary and an understanding of how the world works, too. Without engaging in plenty of talk before they start school, children begin their attempts to read with a massive conceptual deficit. They just don't make as many connections between words, what they mean, and what describes them.

That point--the relative advantage given to children who talk and are talked with--was recently emphasized to me in a series of outreach story times all featuring the same book. The book in this example: I Spy with My Little Eye by Edward Gibbs. The book is a series of "I Spy" games: a two-page spread allows the children to spy an animal's color while a speech bubble gives a hint what the animal is; and the following two-page spread displays the animal for children to see in full. A sample spread would be as follows: "I spy with my little eye something that is white. [speech bubble: I live in the Arctic.] / I am a polar bear!" Simple enough from the reader's perspective.

What I've noticed in sharing this book with a variety of groups is that some story time audiences are quick to shout out what animal they spy while others need the page turn to really know what's going on. One preschool, when the children spied red, immediately guessed "fox"--and another preschool only knew it was a fox after seeing the full illustration; not even the hint "I have a bushy tail" gave away the animal's identity for the latter group.

What's my point? Obviously both groups know what a fox is. The kids in the first preschool, though, were able to guess "fox" using context clues--at some point in their lives, they have talked about foxes, which are often red and which have bushy tails. The can connect "fox" and "red" and "bushy tail" in a sort of concept map. The kids in the second preschool, on the other hand, weren't able to piece it all together using concept knowledge; they know a fox when they see one, but they have to see it to know it could be a fox.

This discrepancy really illustrates the importance of talking with children all the time. It's important to talk about foods we see on the table, at the grocery store, or in a restaurant; it's important to talk about the clothes we see when we're shopping, the clothes in our closets, and the weather we wear them in. It's important to talk about everything a child encounters in life and in books because that talk gives kids the ability to name and understand things they'll see later on in life or in books. And if they understand it now, they've got a better chance of being able to read about it later. Talking can give such an advantage to children from any background. I cannot overemphasize the importance of talk.

Have you encountered any situations that really emphasized for you the important of talk in developing early literacy? How do your express the importance of talk to caregivers?
Posted by Amy at 4:00 AM