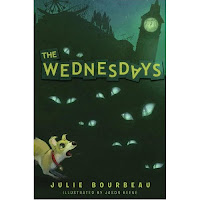 The Wednesdays, written by Julie Bourbeau with illustrations from Jason Beene, tells the story of Max, whose village is completely normal--except on Wednesdays. Every week when Wednesday rolls around, all the village residents close their shops, lock their doors and windows, and stay inside all day. Those who don't, those few who venture into the Wednesday madness, experience odd little mischiefs like having their pants pulled down, tripping over seemingly nothing, and finding all manner of devices and machines don't work as they should. Wednesdays, frankly, are weird.

When Max ventures out one Wednesday, however, he goes in search of the creatures that wreak so much havoc--called, easily enough, wednesdays. He finds them, and while at first he finds their pranks harmless and funny, he begins to see a crueler side of many of the older wednesdays. When he starts to turn into one of them, he worries. Could he be destined for a life of spreading mean mischief in his village once a week? It's up to Max and a few of his friends to navigate the paranormal happenings in their town and to save Max from permanently becoming a wednesday.

The Wednesdays has a premise that many young readers will find interesting, and the confusion and suspense get more weight as we follow along with Max as he experiences his change toward one of the wednesday creatures. The book has some funny characters and funny passages, but it gets sneakily moralistic, too; as Max ponders the merits of mischief for mischief's sake, he starts to consider just how much one person's actions can influence others. The story is strange, sure, but it is solid, moves at a quick, thrilling pace, and boasts strong young characters. I will recommend this book to young readers, in particular male readers, with a penchant for odd stories or who are looking to relate to a character who feels a bit different from everyone else.

The Wednesdays will be released by Alfred A. Knopf Books for Young Readers on August 14, 2012.
Posted by Amy at 11:13 AM