I think I've mentioned that I make it a point to read as many new picture books that come into my library as I can. I make note of the titles that I think would make great read-aloud story time additions, and every so often I amass enough new hits to fill a story time. I enjoy knowing the kiddos will hear great stories even if there is no unifying theme to the program. This month at preschool outreach: a smorgasbord of bears, robots, and storytelling. 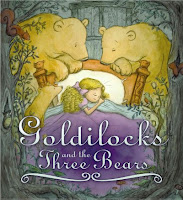 Story: Goldilocks and the Three Bears by Amanda Askew
The folktale of Goldilocks and the Three Bears is a classic for a reason. It's got great repetitive and cumulative elements, fun anthropomorphic characters, and a young protagonist who gets herself into a bit of mischief--all features of stories that young kids love! I start off asking how many kids have heard this story before--at least two-thirds, usually--before briefly explaining what it means to be a classic. Despite knowing the story, kids sit rapt as I read this. They love hearing something familiar while engaging with new, beautiful pictures. This story also provides a segue for talking about the moral of a tale. I love that at least one kid always mentioned stranger danger at this point. 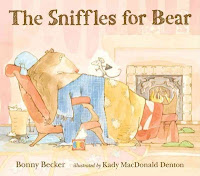 Story: The Sniffles for Bear by Bonny Becker
This story is a funny, slightly longer tale about Bear, who is convinced his current illness will be the death of him, and Mouse, who comes to Bear's house to help him get well. Bear is a comically big malingerer, and Mouse cutely provokes him on multiple occasions. What shows through, though, is the strong friendship between the two creatures. Sure, Bear may over exaggerate his cold, but Mouse seems more than happy to put up with some drama to help his friend. The sentiment is returned when Mouse finds he has come down with the sniffles, too.

Action Chant: "Going on a Bear Hunt"
This chant is a staple of many a day camp and preschool, and for good reason. First and foremost, it's fun--kids love doing the actions and imagining the thrills of the bear hunt. The appeal of this chant is greater, though, when one considers that it reinforces concepts of opposites, direction, chronology, spacial reasoning... Plus, nothing can go horribly wrong with a wiggly, slightly noisy story time interlude. 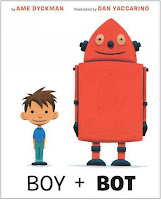 Story: Boy + Bot by Ame Dyckman
Another lovely, simple friendship story. Boy and Bot, a robot, meet one day and become friends. While playing together, Bot's power switch gets flipped to "off." Boy doesn't know about Bot's power, so he assumes Bot has taken ill. Like a good friend, he takes Bot home to nurse him back to health. During the night, however, Bot is turned back on and mistakes Boy's sleep for malfunction. Bot then takes Boy to his inventor's house, where he tries to replace his battery (kids love this bit of goofiness--boys don't need batteries!). The illustrations in this shorter, straightforward picture book fit perfectly with its sincerity and minimalism. I'm going to be using this story again, and not just because it allows me an excuse to use my robot voice. 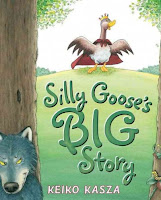 Story: Silly Goose's Big Story by Keiko Kasza
Goose is a great storyteller, and he and his friends act out his stories for play. Goose's friends become frustrated, however, when Goose insists on always being the hero. When Goose is caught by a wolf intent on having him for a snack, Goose must tell the biggest story of his life. He creates a story about Wem, short for "Wolf Eating Monster," in hopes of frightening Wolf into leaving him alone. When a scary Wem-like creature approaches, Wolf does leave Goose and run away. It turns out "Wem" is really the team of Goose's friends, working together to save Goose. Goose thanks them for being heroes instead of just playing heroes, and he begins a story about a silly goose with wonderful friends. I suppose my story time theme could almost have been "friendship"--this story is another great illustration of friends being there for one another.

Closing Song: "If You're Happy and You Know It"

Other books I had on hand in case they were needed:
Where the Wild Things Are by Maurice Sendak
Clink by Kelly DiPucchio
Born to Read by Judy Sierra
Posted by Amy at 2:28 PM