Theodore Boone: Kid Lawyer is the first book in a legal thriller series for young readers by John Grisham. You know all of those slightly argumentative (in a good way!) older elementary school kids who seem always ready to pick an arbitrary fight over books, movies, anything? Consider getting those kids started on this series. 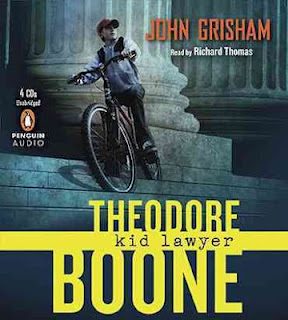 Theo Boone is the only child of two lawyers, and the way he tells it, he had no choice but to become steeped in law and justice as well. When a murder trial is set to take place in his town, Theo uses his familiarity with the judges and courts to get his government class seats at the opening arguments of the trial. Theo's desire to follow every detail of the trial becomes somewhat complicated, though, when a friend confides he might know something about the case--something big. Suddenly Theo is torn between keeping his friend's confidence and seeing justice prevail.

Theodore Boone: Kid Lawyer could have easily spiraled into a boring, dumbed-down legal story, but I'm glad to say that is decidedly not the case. The thriller is exciting and captivating enough to keep almost any reader's attention, yet it is not so sensational as to turn away fans of realistic fiction or sensitive readers. I love the narration style, too; everything is told from Theo's perspective, and that means we're privy to all Theo's snarky thoughts while he presents an outward reserved politeness. What kid can't relate to having to agree politely with a grown-up when he'd rather tell said grown-up off? Theo Boone may be acting like a young lawyer, but he is very relatable.

I listened to the audiobook version of Theodore Boone: Kid Lawyer, which is read superbly by Richard Thomas. The pacing is perfect to build suspense and develop Theo's character, and Thomas does enough voice variation to keep the plot moving along quickly without generating confusion. The five-hour audiobook makes for great listening on an otherwise uneventful car ride, perfect for summer travels.

Theodore Boone: Kid Lawyer is nominated for Missouri's Mark Twain Readers Award for the 2012-2013 school year. The award recognizes books for readers in grades 4 through 6.