We've just wrapped up the strategic planning process at my library. It was a robust multi-month process, and we absolutely wanted lots of patron and community feedback to inform the direction of the library. To help the strategic planning team to position the library in a future that our community actively wants for our village, we wanted to hear their thoughts about where the community should go and what it should have--library included.

Around the time we were mulling over ways to generate community input, I was reading a book that included a quick mention of a Japanese festival, Tanabata. One of the customs associated with this holiday is the writing of wishes on tanzaku, small pieces of paper, then either setting the paper afloat on a body of water or tying it to the branch of a wish tree. I found this image of people--neighbors who share spaces but may not know one another--all sharing their wishes communally to be incredibly beautiful. How might we embrace this idea in a manner that would get patrons sharing their wishes for our community?

Cue our community aspirations boards. Since we wanted folks to share their aspirations--their wishes--we decided to go with a "wish upon a star" theme: a big nighttime starscape on foam core with a sign reading "Wish Upon a Star: Wishes for Skokie." Our graphics department made two of these boards, and we placed one at both of our checkout locations (which are on opposite sides of the library, together in the paths of everyone who uses the library). Next to each board was a table area with colorful star-shaped sticky notes, writing utensils, and a simple sign entreating folks to share their aspirations for Skokie on a star.

We chose this type of flat format for feedback because it could fit into the high-trafficked checkout areas without causing physical obstructions. And we opted for colorful visuals because, as we had hypothesized and as was confirmed by participation rates, when patrons see the colorful notes, they want to add their own to the board. We found that the more wishes that were on the board, the more people were inclined to add.

We left the community aspirations boards up for about three weeks, and some colleagues and I would periodically remove some stars and record the wishes on them for our final report. Over those three weeks, we had over 400 responses. These came from children through seniors and everyone in between. As you might imagine, some were more legible than others.

Now, if you want to do this type of patron-sharing project, you could certainly stop here. You can read the comments on the boards themselves and get some great ideas about what your public wants for the community they live in. Since we wanted this information for strategic planning, however, I put together a report of all the contributions. This involved coding the responses for themes so we could see what particular aspirations seemed most widely shared. The coding process required throwing out some of the contributions; I'm talking about the stars on which folks had written "poop" (there were at least a dozen); where young children had simply scribbled (we appreciate those thoughts and only wish we could translate!) or practiced their names; or where the comments didn't really fit into the category of realistic wishes from which we could suss out deeper aspirations. My favorite of this third type came from a four-year-old: "I wish Skokie was made of waffles." I hear you, Sadie.

We ended up with 363 viable aspirations that were coded into about 28 categories, then analyzed for frequency. 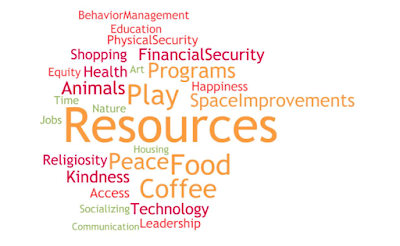 Far and away the aspiration for Skokie most frequently expressed in this project was for resources--both specific types of library resources and other types of resources in the community. To me, that indicates that lots of people in our community know what they want, but they may not know where to find it. That's something the library can certainly help with.

Food, play, and coffee were in the next tier of most-cited aspirations. While some of the comments about food had to do with food security, at least half of them were referring to spaces that were inviting and affordable to eat with others. Combined with play and the high desire for a coffee shop near the library, one interpretation of this grouping of aspirations could be that folks want spaces were they can be and play as individuals and as families who are part of a larger community. Again, this is a value that I think a library can be well-situated to embrace and promote.

We learned a lot from this community aspirations board project, and it certainly informed how the core strategic planning committee thought about what the community wants from us and from the place they live. We exist for them, and so we wanted to know what they want. We heard. And I encourage you to think about ways to get your patrons to weigh in on the type of community they want to live in so that you can think about how the library fits into that vision.

Email ThisBlogThis!Share to TwitterShare to FacebookShare to Pinterest
Labels: around the library