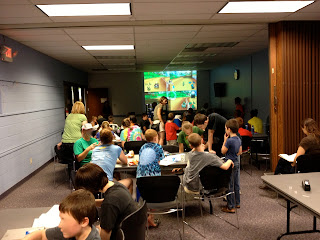 One of my goals in offering children's programs in my branch library is to promote materials in our collection. My colleagues and I do a pretty good job of promoting books, audiobooks, music CDs, and DVDs in our programming, but we hadn't really tapped the videogames collection. This summer, I rectified that deficiency by offering two Mario Kart Tournaments on one of our district's Wiis.

I heard from a lot of kids after the program, and they all said they had a fun time having a friendly competition at the library. Lots of kids play Mario Kart at home or on their portable DS consoles, but they don't always get the chance to race other kids--which makes gaming at the library great. Many parents also expressed their thanks at offering the event, which took place over the course of 2.5 hours on a Saturday in June and again in July. It gets pretty darn hot in the summer here, and I love making the library a destination for a cool activity.

Here's how I ran the tournament:

Practice Rounds - As children entered the program room, I asked them to please fill out notecards with their names and ages. I kept the cards in the order in which children arrived, and that sequence made up the order for our initial practice races. Some teen volunteers helped me set up the Wii so that four children could race at a time; they also set the game so that a "round" equalled two games, and while racers could choose their characters and vehicles, the racetrack was selected randomly. Each child got to race two practice races during the first part of our program. 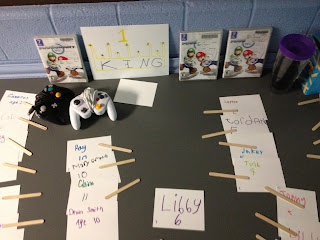 The Tournament - Once every child had completed the practice rounds, the tournament began. I created a bracket using those name/age cards I had the kids fill out, and I made the bracket pairings by ages. Thus, in the first round of the tournament, 6-year-olds were racing other 6- and 7-year-olds, 12-year-olds were racing other 12- and 13-year-olds, etc. The tournament happened with the same settings as the practice rounds, which meant each bracket pairing raced on two tracks to determine the overall race winner. That winner would move on to the next bracket, which I again paired by ages. The way Mario Kart keeps score, racing twice means that two players may end up tied for first place; in these instances, both first place racers advanced to the next round of the tournament. We kept progressing through the tournament bracket in this fashion until we were down to the final four-person race.

While Kids Were Waiting - I knew that with a large group of children (I had 48 at my June program, 20 at the July), kids would have to wait a while between turns racing. I made plans for them to have plenty to do while they waited:


The Timing - The way the timing breaks down has a lot to do with how many people enter the tournament; set your program capacity so that your tournament lasts the amount of time you want it to. In our two tournaments, not everyone stayed for the whole program; some folks left after they had been eliminated from the tournament, or had grown a bit bored of watching the races. 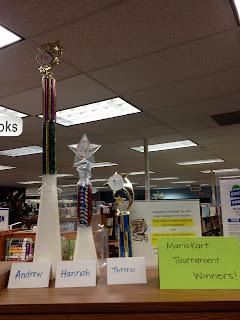 The Winners - I made a big fanfare out of the final round of races, using my best sports announcer voice to give something like a play-by-play. (Note: It's a good thing I'm a librarian and not a sports announcer.) When the winners were evident, I presented the trophies as well as the other pictures and certificates that some of the children had made. Many kids wanted their pictures taken with their trophies, and once that was done, I made name cards to accompany the trophies on their display on a prominent shelf in the library. The trophies are still up on that shelf, proclaiming the names of the tournament winners for all library visitors to see.

Do you have questions about this program? Have you offered something similar at your library for school-age kids? Let me know in the comments!