I'm now four months into offering a monthly Saturday preschool program--Milk & Cookies Story Morning--here at my library. Attendance seems to be growing steadily, with each program pretty well split between new faces and return attendees. For my June program, I even had a teen volunteer in the room to help keep things running extra smoothly while the kids and I got silly. Once again, my four content goals for this story time program remained the same: interactivity, transmedia, folk/fairy tale sharing, and free play time. Here's what we did: 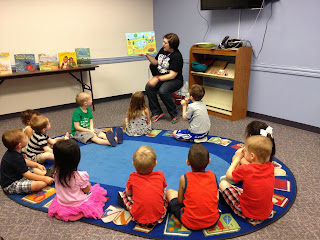 Story: Shark in the Park! by Nick Sharratt
My colleague Angie introduced me to this book during my first month on the job, and I have loved it ever since. It's a brief, mostly-rhyming story of young Timothy Pope who, having just received a telescope, takes it to the park to look at things. What does he think he sees? A SHARK IN THE PARK! I like to encourage kiddos to use their own telescopes (hands in a telescope circle in front of one eye) as we read this clever book.

Song: "Grey Squirrel"
The song cube indicated that we should sing "Grey Squirrel," and sing it we did--complete with swishing our bushy tails. 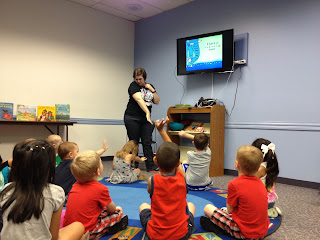 App: Safari Animals by Simms Taback, part of the Simms Taback Children's Book Collection app by CJ Educations
I turned off the sound and used the read to me function of this app, which let me move through the pages at a pace that allowed the children and me to interact with what we were reading/seeing. The premise of this story is basic: the viewer can only see part of an illustration of an animal, and the words on the screen give hints to its name. This story pacing gave us plenty of time to talk about what we know about safari animals (giraffes, hippos, ostriches, lions), and we had fun making sounds and moving our bodies like the animals would. I mentioned to attending caregivers that this is an example of using technology in an interactive and educational way.

Song: "Rock and Roll Freeze Dance" by Hap Palmer
This short song introduces the idea of dancing until the music stops, at which point everyone is meant to freeze. It's a great, short, wiggles-reducing musical interlude.

Story: "Stone Soup"
I put together a kit of props for telling the folk tale "Stone Soup" that includes a bowl, a spoon, a stone, and cut-out pictures of various types of vegetables. I passed out the vegetables and spoon to children in the room, and together we made soup as I told the story. Because of the younger age range of my attendees, we dumped a bunch of veggies in the soup pot at once--attention wasn't going to last much longer. I'd use this story again with a slightly older audience.

Song: "If You're Happy and You Know It"
The kids insisted we roll the song cube again, and this song is what it landed on. Who am I to say "no" to a joyful request for a song?

Song: "Silly Dance Contest" by Jim Gill
We finished the story time portion of our morning with this wonderful crazy-to-cool-down song. Try it if you're looking for a way to get kids moving without them turning totally bonkers at the end.

Milk and Cookies Time!
Our menu included chocolate Teddy Grahams (much to everyone's delight) as well as 2% milk or water. These smaller cookies seem to have gone over the best of any of our cookies so far; I'll be sticking to the small bites concept in the future. 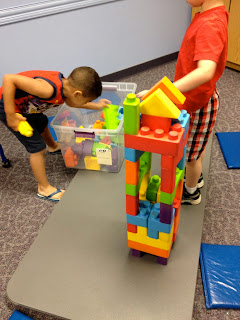 Play Time!!
I rolled back the partition to the other side of our meeting room to reveal four play stations: a science station (magnets, magnifying glasses, balance scale); a cars and garages station (all wooden toys); a concepts station (writing, colors, puzzles, counting); and a building station, which featured my branch's early literacy play kit for the month, chunky blocks. Four families stayed for a full half hour of play after the snack, and I was excited to see how many caregivers got down on the sit-upons at the stations to interact and play with their own children and the kids who approached them. I also used this time to invite families to sign up for summer reading if they hadn't already. I got six new summer readers registered, which made me happy.

I love that this program has a very simple level of input from the caregiver--just come to the library!--with a huge potential for return. Early literacy story time, information on media literacy, relaxing time to enjoy a small snack, productive play time...even summer reading. That's a lot of bang for zero bucks.