May Milk & Cookies Story Morning: Plenty of fun on a holiday weekend 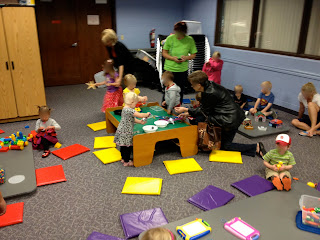 Over the weekend, I led my third ever Milk & Cookies Story Morning family story time program. For more specific details of my rationale in offering this new weekend program, you can see my first two posts on the topic. Suffice it to say that my personal must-haves in the program remained the same: transmedia, interactivity, a folk/fairy tale, and time for free play--this time including some simple science activities.

The program went really well, and a good crowd attended despite it being a holiday weekend. Here's what we did:

Story: Up, Down, and Around by Katherine Ayres
I prefaced this story by saying it was about growing all sorts of vegetables, and I asked the kids what vegetables they knew. Throughout the story, we would point out the vegetables we like. The last page shows a feast of foods created with the veggies, and we had a fun time naming all the dishes.

Song: "Five Little Ducks"
A roll of the song cube dictated that we would be singing "Five Little Ducks," so I pulled out five little rubber duckies as a visual counting aid. During the first verse of the song, I was pretty much the only one in the room singing and making the mamma duck's big "QUACK! QUACK! QUACK!" By the final verse, though, everyone was joyfully singing with me. A wonderful benefit of repetitive counting songs and rhymes: kids catch on and gain confidence as they go. 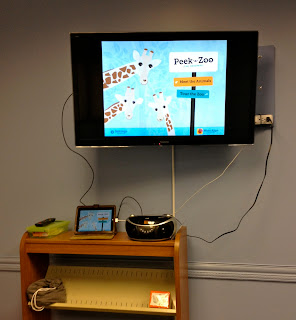 App: Peek-a-Zoo: Toddler Peekabo at the Zoo by treebetty
To use this app in an interactive way in the program, I turned off narration and background music--all noise except the animal noises. I cued the app to the first "page," which shows a lion crouching in some grass. When it was time for the app, I turned on our tv and we took a walk through a zoo. Each animal has a two-stage process: one where you can try to guess the animal by what you see on the screen, and the second when the animal appears in full and you hear the sound it makes (the second page also shows the name of the animal written out, so one could talk about letters, too). I asked lots of questions to help kids guess the animal they might see next, and we used clues from what we could see in the animal's environment to help us figure it out. One of the things I love about this app is that the animals are not just your stock zoo animals--it includes a number of lesser-shown ones, like walruses, too. I engaged caregivers in a brief tidbit about the difference between using technology with children passively--e.g., sitting them in front of a tv or device unattended--and actively--i.e., engaging in the technology with them.
As the picture shows, my iPad setup includes using a Digital AV Adapter and HDMI cable. I operate the app from the iPad, which is mirrored onto the HDTV screen.

Song: "I Know a Chicken" by Laurie Berkner
I love this song and use it all the time. It's a perfect length for keeping kids interested, and when I pass out the egg shakers, everyone's excitement levels go up a bit. That makes for a great interactive program element.

Story: The Three Billy Goats Gruff by Paul Galdone
Only one or two kids in the program were already familiar with this story, so I was very glad I selected it for our story time. It's a great one for getting kids involved in trip, trapping across the bridge, and it also allows the use of some great silly voices for the billy goats and troll.

Activity: Rhythmic Play with Scarves
I handed out multi-colored scarves to all of the children, and once they had stood up we began waving our scarves. I put on "Dancing Scarf Blues" by Carole Peterson, and we had some fun waving our scarves around to the music.

Milk & Cookies Time!
This weekend's selection included chocolate chip cookies and 2% milk or pink lemonade. There was at least one dad who looked like he wanted a cookie, too, but when his wife opted not to have one, he did the same. The kiddos loved it, though.

Free Play
As with previous weeks, I set out little play stations with lots of the library's stock of early learning toys. We had building blocks and pipe builders, build-a-monsters and wooden cars with garages. New this time were some magnetic writing boards--always great to work some writing in!--and a repurposed train table frame that I turned into a science station. I set out magnifying glasses with seashells, a starfish, and feathers to explore up close; magnet wands with a variety of sizes of paper clips, washers, and jingle bells; and a balance scale with random objects to play with weight. Every child went to the science table for at least a few minutes, which made it the hit of the free play time. All the stations get pretty well explored and the toys played with--nothing like some free time to interact with the world as you please.

An aside: I am starting to realize that, if this program's attendance keeps growing and I still really want to focus on the free play (which requires space), I may have to adapt the milk & cookies portion of the program. My program room isn't big enough for a larger crowd to have space to sit down and move around in story time, sit at tables for the snack, and also have toys set out with room to play. I'm going to think about options like lunchbox-size cookie snack bags and juice boxes or milk cartons--things that can be enjoyed, picnic-style, without big tables and chairs and without to much threat of spills. Anyone have any ideas?