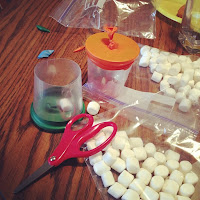 Today's guest post comes from one of my staffers, Miss Erin. She is sharing a preschool story time program that she offered in our library last week. One of my favorite aspects of her program: the Mini Marshmallow Shooter STEAM craft! Engineering + Arts, with fidelity to her theme... terrific! Without further ado, it's Miss Erin!

Song: "Where is Thumbkin?"

Story: Emily’s Balloon by Komako Sakai
While this book has a story to narrate, I decided to use it for a picture walk. Preschoolers helped me tell a story about a little girl named Emily and her yellow balloon. 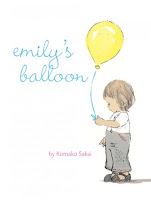 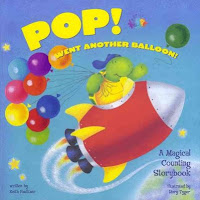 Song: "Animal Action I" by Greg and Steve

Story: POP! Went Another Balloon! by Keith Faulkner, illustrated by Rory Tyger
This story demonstrated counting and subtracting in a fun and repetitious way. Ended up being a great interactive story!

Story: Sally’s Great Balloon Adventure by Stephen Huneck (didn’t get to this book)
This is a story about a dog,Sally, who goes to a hot air balloon race. While looking at the balloons, Sally smells fried chicken! In an attempt to find the chicken, Sally finds herself in a hot air balloon, alone and floating away. While Sally’s adventure makes the news, all she can do is worry about the fried chicken.

Craft: Mini Marshmallow Shooters (from www.cometogetherkids.com)
Materials Needed: plastic cups;   balloons;   mini marshmallows;   scissors
Each child made two shooters. I had the cups already cut. The children tied the balloons, cut the ends off, and placed balloons over cups. As they were leaving, I supplied them with a baggie of marshmallows and balloon coloring sheets.

*lead photo by Erin Gilmer
Posted by Amy at 4:00 AM