Angry Birds: A STEAM Program for the Brave

When I saw the Angry Birds Live! programs shared by the likes of Future Librarian Superhero, Bryce Don't Play, and Teen Library Toolbox, I knew I needed to add that program to my schedule of upcoming events. They made it sound so easy, so much fun! So I started saving book boxes and asked staff to bring in all manner of recyclables for building the towers, and the kids of a library employee offered to donate the use of their Angry Birds stuffed pillows for demolition duty during the event. I figured I would round out the projectiles with some of the tactile balls I use in baby programs, and we'd use our miscellaneous-print fabric to toss the birds at the towers. Simple enough.

My Angry Birds! program took place on a day off of school--translation: no one had recess--that also happened to be a frigid day here in Missouri--translation: no one had left home or burned off any energy at all prior to coming to the library. We had a massive number of kids and their grownups come into the program room (final count was around 57 people), and they anxiously awaited the go-ahead from me to pick through the tables lined with building materials and get to knocking things down.

I had the best of intentions of making the STEAM elements of this program explicit in my program introduction: I mentioned the engineering inherent in building towers, the science of projectiles, the creativity of making crazy structures. I had the kids' attention for maybe five minutes before their pent-up energy demanded they be allowed to construct and destroy. 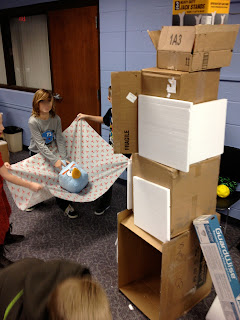 Our 45 minute program featured rapid cycles of tower-building and destruction. I initially encouraged the children to form small groups to create small towers; once they were satisfied with their towers, they worked together to project an Angry Bird at it to knock it down. I then encouraged them to pair with another group to try to build a larger, more structurally sound tower that wouldn't be knocked over by just one projectile. They happily obliged, building structures with solid foundations, but soon the cheers accompanying the destruction overshadowed most of my attempts to provide further guidance. They were having fun, though, so I didn't worry.

Finally, with just eight minutes left in the program, I shouted out the final instructions: children would form a total of three teams, and each team would strive to build the tallest, strongest tower. Then we'd all watch the demolition efforts together. All three groups made massive towers that touched the ceiling tiles--parents put small children on their shoulders to get the final pieces atop the towers. I was impressed by the dedication to the challenge.

The children gathered to watch the destruction of the first tall tower--then cheers. The children moved to the second tall tower to watch its fall--more cheers. But then...

The only way I can think to explain the last moments of the program is to say that hive mind kicked in. Somehow, without any instruction from me and without any oblique communication, every child picked up a ball. Then every child aimed. Before I knew it, someone was counting down, and after that 3-2-1, every child threw his or her ball at the tall, tall tower, which immediately came crashing down.

The next thing I saw was a room full of maniacally laughing children, pieces of recyclables scattered at their feet, holding bits of cardboard and styrofoam over their heads and tearing them to tiny pieces. Total chaos, yet total joy. So many smiles as families left. So much vacuuming after they were gone.

So I would say, librarian friends, that in my experience an Angry Birds program is not for the faint of heart, especially in the winter. If you aim to offer one, look to those bloggers linked in the intro who seemed to have a calmer time of it. Yet all the mayhem of that evening was worth it, especially when a few kids stopped by the next day to say how much fun it was to build things at the library. It just goes to show that the things you build needn't be permanent for the enjoyment and informal learning to last.
Posted by Amy at 4:00 AM