The Expeditioners and the Treasure of Drowned Man's Canyon 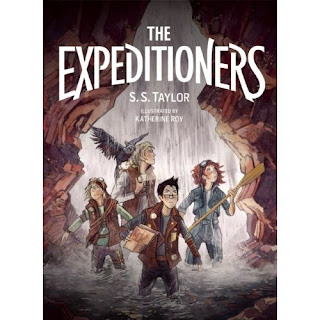 When The Expeditioners opens, young Kit West is in the Oceania marketplace with hopes of getting some food for himself and his siblings. Ever since Kit, Zander, and M.K.'s father died while on an exploration, the three children have had to fend for themselves. But when a mysterious man gives Kit a package from their father, the children learn that they may not know the full story of their explorer father's expeditions or his mysterious death. Codes, maps, and a few fortuitous interactions lead the West children to Arizona in search of the legendary Drowned Man's Canyon and its gold, and the trio hope they'll also discover why their father left them a secret quest to follow. Throughout their journey they encounter danger and adventure quite unlike anything they were expecting.

This solid steam punk adventure borrows from dystopian fiction in its setting: after technology was shown to have manipulated and stifled human discovery, explorers learned that the world on the map we all know wasn't an accurate picture of our planet. With the discoveries of new lands and resources, however, came a shady, totalitarian government unafraid to use brute force to preserve its power. Not only do the West children have to face uncharted territories and unknown creatures in their adventure, but they must deal with a regime with unchecked control as well. Taylor provides a well-constructed, believable world for her young heroes. The story moves at a thrilling pace, and the adventure will capture the imagination of readers. Roy's illustrations add another terrific element to the story; the jacket, endpapers, and cover of the hardcover book are stunning. I hope this title marks the first in a series, as I can see many readers developing a fondness for the characters and a desire to see their adventures progress.

I'll be suggesting this title to older middle grade readers who love adventure and steam punk, and I'll also hand sell it to readers who enjoy stories and non-fiction of exploration and geographical discoveries.

Check out the book trailer!


Review copy provided by the publisher.
Posted by Amy at 4:00 AM