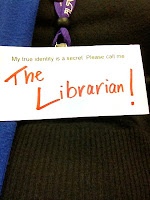 I think it is safe to say that superheroes have been of lots of folks' minds as of late. What with all of the big-budget superhero movies hitting theaters over the summer, the variety of superhero graphic novels coming out for early and middle grade readers, and increased interest in making superhero-themed picture books for the younger set, there seems to be large interest in all things superheroes. As a librarian, I want to consistently use my powers for good--and that recently meant offering a Superhero Party program. Here's what it looked like:

As children made their way into the program room, they saw tables set out with supplies to create their superhero costumes: blank face masks from our die cut machine; toilet paper tubes to be decorated and cut into wrist bands; and name tags ready to proclaim each child's superhero name. We spent a good twenty minutes in costume preparation--and let me tell you, the creative juices were flowing big time! I made sure to walk the room and engage each child in a conversation about his/her superpowers, costume choice, etc. Also, since the program began with our craft--a quieter activity--I was able to leave the program room doors open for the first twenty minutes. I had a handful of children come into the room for the program just because they peeked in and saw something they found interesting. I love getting walk-ins at school-age programs.

As children were putting the finishing touches on their costumes, I took the opportunity to talk about a few books in the collection featuring superheroes they might not have been familiar with. For the younger set, I book talked Wedgieman: A Hero is Born by Charise Mericle Harper and illustrated by Bob Shea. For older readers, I talked both a graphic novel series and a chapter book series: Lunch Lady by Jarrett Krosoczka, and The Adventures of Captain Underpants by Dav Pilkey (complete with flip-o-rama demonstration). 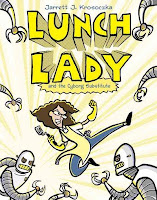 After the book talks and a quick superhero photo break, we moved into our superhero skills training. Two games were available for our young heroes, both involving tossing balls. First was a knock-over-the-supervillains game, similar to what you might see at a school fun fair. I affixed some common comic book villains to the cans, and we used textured rubber balls as ammunition. The second game involved knocking some invisible villains out of a building--a.k.a. a large box I carved window-like sections out of and then painted. The ammunition for this game was soft spongy balls that are designed as pool toys. After hearing about the invisible villains, a few children modified their costumes with special invisibility-viewing capabilities. I love the young child's mind!

After a few rounds of skill practice, it was time for our final superhero endeavor: ridding the library of a deadly kryptonite contamination. *GASP!* For this game, we split into two teams. The kryptonite--balled up pieces of aluminum foil--was scattered around the far end of the program room, and the kryptonite could only be picked up with the assistance of two pencils--no touching the kryptonite! The goal was for each team to send one member at a time from their home base, where they had a decontamination bucket, into the contamination field to pick up and carry back a piece of kryptonite using their tools. Once the piece of kryptonite was deposited in the decontamination bucket, another team member could go to continue the collection. At the end of the game, the team with the most kryptonite collected would win. Since our attendees were toward the younger side of the school-age range, their pace for collecting kryptonite was not particularly quick; to help move things along, I let teams have multiple members out in the contamination field at a time. 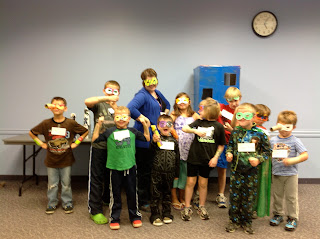 Once all the kryptonite had been cleared, I reported that I, The Librarian, would need to count the kryptonite to determine the winning team. I suggested that they pass the tallying time by looking at the superhero books available for check-out--I had set up a table with a variety of options. Note: almost every book was checked out after the program; since they were looking at books as part of the program time, they were a captive audience and really looked at their options. When finally I announced that one team had edged out the other with a single piece of kryptonite, everyone was happy and had a book in hand.

The children walked out into the library in their superhero costumes after the program, and I made sure they left with my favorite superhero message as well as a book: use your powers for good. Based on the number of smiles on those masked faces, I'd say the whole event was a success.
Posted by Amy at 4:00 AM