Outreach Story Time: Dogs and Cats (with some fish thrown in)

I started my second set of fall outreach story time visits this week, and once again I included titles nominated for the Missouri Building Block Picture Book Award. I chose two of the nominated titles that include dogs, then I rounded out the story time with a few other favorite animals: cats and fish. Here's what I did:

Story: Rrralph by Lois Ehlert
Ralph has a special skill: he can talk! Throughout the story, the narrator asks Ralph questions; Ralph replies with words like "bark," "wolf," and "rough"--all words that sound like common dog sounds. Some of the kids may have been too young to get the word play joke, but the whole audience enjoyed imitating each of Ralph's sounds.


Two Little Puppy Dogs
Two little puppy dogs, lying in a heap.
extend two fingers
Soft and wooly and fast asleep.
pet fingers
Along came a pussycat creeping near,
extend finger on other hand
"Meow, meow," she cried in their ears.
say "meow"
Two little puppy dogs after one cat;
have two fingers chase one finger
Have you ever played tag like that? 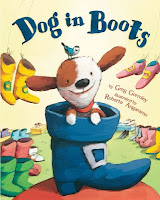 Story: Dog in Boots by Greg Gormley
After Dog reads the story of Puss in Boots, he decides that he wants shoes for himself. The shoe salesman gives him plenty of options, but no pair of shoes is equally good for all Dog's needs: digging, swimming, scratching, running... When the shoe salesman suggests Dog already has the perfect shoes--his paws--Dog realizes he has all the footwear he needs. The language in this book doesn't roll off the tongue quite as easily as in others, but the children seem to enjoy the story.

Story: Pete the Cat: Rocking in My School Shoes by Eric Litwin
Pete the Cat was a huge hit last year, so I segued into stories with cats by reintroducing Pete to the kiddos. They really enjoyed seeing Pete do all of the school activities that they do when they are at school.

Five Little Kitties
Five little kitties in a row
extend five fingers
They nod their heads to the children so.
bend fingers toward audience
They run to the left, they run to the right;
move hand in each direction
They stand up straight to reach the sunlight
raise hand
One little puppy, he's in for some fun;
raise a finger on the other hand
"MEOW!" See those kitties run!
have dog chase cats 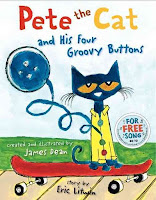 Story: Pete the Cat and His Four Groovy Buttons by Eric Litwin
This is my favorite Pete the Cat story, primarily for the great message--buttons come and buttons go!--as well as the fantastic song. Whenever I've shared this book, kids get really into the rhythm of it. It's great to support basic math skills, too.

Story: This Is Not My Hat by Jon Klassen
Klassen's I Want My Hat Back, with its open-endedness and dark humor, was one of my favorite books of 2011, so I was anxiously awaiting the release of This Is Not My Hat. If it's possible, I like this second title even more. It opens with a small fish confessing to having stolen a larger fish's hat; he knows stealing is wrong, but he wants it, so he has a plan to escape to a patch of seaweeds. As the small fish narrates, the illustrations often negate what he says: for example, when the small fish says the large fish he stole from probably won't notice his hat is missing, we see the large fish looking up to where his hat should be. The resolution is again darkly funny yet open-ended--let me know what ending you think happens.

Song: "If You're Happy and You Know It" + ukulele
I have managed to master this song on my ukulele--well, "master" might be a strong word. At any rate, I accompanied our usual story time closing song with my ukulele, introducing the kiddos to the instrument and inviting them to say its name. We adapted the actions in the song to fit our story time theme: we sang verses of "If you're happy and you know it, be a dog" (with lots of barking) as well as "...be a cat" and "...be a fish." We ended the whole song with "If you're happy and you know it, wave goodbye," which perfectly signaled the end of our story time. I got lots of enthusiastic comments about the ukulele, and I will absolutely be working to learning more songs to share at my outreach visits.
Posted by Amy at 4:00 AM