We have a really strong Teen Advisory Board at my branch. At any given meeting, it's no surprise to have upwards of 25 teens in attendance. They are enthusiastic, dedicated, and thoughtful--and they love the library. Turns out that several other branches in our district also have great TABs, too, and these various TAB members wanted to meet--somewhere cool, doing something epic. Thus the all-TAB lock-in was born.


Our all-TAB lock-in took place last Friday evening from 6 p.m. to midnight at a recently rebuilt large branch--complete with a children's wing and an adult services wing, a layout whose importance will be more apparent later. We had two requirements of teens who wanted to participate: 1) that they be an active member of their branch's TAB; and 2) that they have a permission slip signed by a parent/guardian (to legally protect the library and to ensure parents knew when to pick up their teens) and the participating teen (to acknowledge a behavior standard). Not huge requirements, and very reasonable for encouraging teens to attend an event unlike anything we'd ever hosted.

We had 62 teens show up. 62! Better than we had been hoping for! With 9 library staffers working the event, that made for a decent teen-to-adult ratio. At 6 p.m. we locked the doors, and for six moderately-scheduled hours, teens had the run of the lower floor of the library. Here's a break-down of our lock-in:

6:00 - 6:15 p.m.: Checking in teens
Verifying permission slips, accepting a canned good for donation to a local food pantry as "payment" for participation (we weren't firm on the canned good, as some teens forgot theirs). All teens got a name tag that also listed the branch library where they are involved in a TAB.

6:15 - 6:30 p.m.: Ground rules and Ice breaker game
Ground rules included establishing off-limits areas of the library building, not doing anything that would be destructive to the library, and maintaining a baseline of respect for all fellow TAB members. We also explained the schedule for the night.
For our ice breaker, everyone sat in a tight circle with me starting in the middle. I introduced myself and said a fact about myself. At that point all other people in the circle about whom that fact is also true stood up, too--and then everyone standing had to scramble to find the seat of another standing person not located immediately next to them. The one person left standing after all the seats have been filled starts the process over again (introduction, fact, SCRAMBLE). This game is a great way to get energy up, start to introduce people by name, and demonstrate that we all have a lot in common.

6:30 - 7:00 p.m.: Dinner!
Say what you will about Little Caesars, but those $5 hot-n-ready pizzas are crazy cost-effective when you're buying 22 of them. We also had a variety of chips, cookies, and sodas/water. A snack table stayed up throughout most of the evening, too, for grazers. 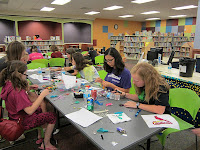 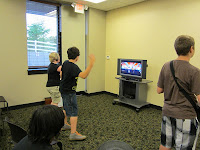 7:00 - 10:00 p.m.: Activity stations
We had four activity stations going on simultaneously:
1) Crafts: Shrinky dinks and friendship bracelets. Oh, my, did they love the shrinky dinks.
2) Buffy Marathon
3) Videogaming: We had two Wiis and an Xbox set up with a variety of games.
4) Games: Our traditional games station offered three separate games, each of which took an hour. From 7 to 8 p.m. was a Book Cake Walk--essentially your standard school fun fair cake walk, except the walking squares showed YA book titles and the prizes were ARCs. From 8 to 9 p.m. was Book Bingo; all squares on the bingo cards were YA book titles, and bingos earned entries in a drawing for a $20 gas station gift card. Then from 9 to 10 p.m. was Minute to Win It, a variety of crazy and exciting one-minute competitive games; winners again earned entries in the gift card drawing.

10:00 - 11:00 p.m.: All-TAB Meeting
TAB members are used to having meetings. For some of them, TAB meetings make up the bulk of their library participation. This All-TAB Meeting provided an opportunity for the TABs from all of the different branches to brainstorm and idea-share. What activities did they hear about that they want to try at their own branches? What would they recommend other branches try? Do they want to collaborate across TABs, and if so, how? We had a back-up plan in case the meeting fizzled and only took twenty minutes, but the teens were happy to spend the full hour talking about what their TAB does, what they enjoy, and what they want to accomplish. If you every doubt the capacity of teenagers to care about issues and make plans to address them, you should attend a library TAB meeting.
Note: Two staff members who helped with the lock-in are not in charge of their branches' TABs; thus during the meeting they cleaned up stations to prepare for the final game.

11:00 - 11:50 p.m.: Glow-in-the-Dark Capture the Flag
Remember how I mentioned the library layout--a children's wing and an adult wing with a central foyer--would come into play in this lock-in? Glow-in-the-Dark Capture the Flag is when that happened. We split the TABs into two roughly-equally teams--individual branches stayed together and combined with others--and assigned each a wing. All participants got glow sticks, and each team had a large glow stick flag to hide and defend. We explained the rules we would be using: if you're tagged on the other team's territory, you go to their jail; stay in jail until "jailbreak" is announced over the PA; the foyer is neutral territory; no carrying your flag around except to change its hiding location; and, my favorite, if you are hit by a dart from a staff member's Nerf gun, you go to jail (regardless of what team you're on!). After a few questions, we turned off all the lights on the lower floor (safety lights remained on for a bit of visibility without ruining the whole glow-in-the-dark aspect). Let the games begin!
One team was definitely more coordinated than the other, so the first game ended after ten minutes. We started a second game, which lasted fifteen minutes. At that point we had the teams switch sides--would that affect the outcome? We didn't get a chance to definitively answer that question, as we had to call the game at 11:50 to wrap things up. The team that had won twice got to enter their members' names in the gift card drawing. Everyone said they had a lot of fun playing Capture the Flag.

11:50 - 11:55 p.m.: Group photo and Prize drawing
It was surprisingly easy to get all of the teens in a mass to take their group photo. They were then centrally located to hear the drawing winner announced. Excitement all around!

12:00 a.m.: Teens picked up
All the teens were picked up by their parents by 12:10 a.m., which means staff got to finish cleaning up quickly and were on their own ways home by 12:30. A successful end to a busy night.


Everything went very smoothly--even surprisingly so for a first-time big event. Since I was staffing the craft area near a phone, I updated folks about the schedule every hour via the PA system. Library staff mainly stayed around their activity areas, leaving teens free to go from place to place as they pleased. As far as I could tell, we had no behavioral issues. Everyone got along, no one tried to get into off-limits areas of the library... It was a rousing success, and a great way to top off the summer.

Teens are already asking when we'll do a lock-in again. The plan for right now is for our district to make the all-TAB lock-in an annual event--with the knowledge that excitement and participation will continue to grow. If you're looking to reward your hard-working teens with a fun, special activity, I highly suggest you give a lock-in some thought--especially now that you've got a program plan.
Posted by Amy at 4:17 AM