A Full Moon at the Library

Here's hoping your full-moon Wednesday at the library isn't too cuckoo bananas!
~ 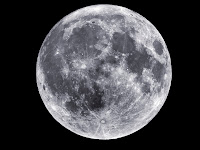 Board books became a battleground
With high-pitched shrieks and crying sounds.

An angry child wailed to complain;
Her sister would not share a train,

And the dead-end track was suddenly
A tear-worthy catastrophe.

Another two began to fight,
Tugging puppets with all their might.

Moms seemed confused by the red-faced yells;
Their kids were under tantrum spells.

Then voices raised throughout the stacks
As mouths demanded, "Time for snacks!"

Parents dragged their kids away
Leaving the librarian to survey.

The ABC shelves, of considerable heft,
Were shifted two feet to the left.

And papers littered the children's room,
Remnants of the rage and gloom.

What had looked to be a quiet day
So massively had gone astray.

But things'll return to normal soon--
At least until the next full moon.
Posted by Amy at 6:00 AM

Email ThisBlogThis!Share to TwitterShare to FacebookShare to Pinterest
Labels: poetry