Due to a scheduling hiccup, I filled in this past weekend for our regular monthly Fun with Science program. Usually, the program is helmed by a professor from the physics and astronomy department at Northwestern University. It's a popular program--we regularly max out our registration limit of 30 2nd-5th graders--so I didn't want to cancel. Instead, I stepped in to talk about meteorites with some hands-on activities.

First we talked about some of the terminology and the life cycle of these space rocks. What's an asteroid versus a meteoroid versus a meteor versus a meteorite? I put together a simple deck of slides with images to accompany this discussion, and I made sure to ask lots of open-ended questions to get kids thinking critically about our topic and also about their own previous knowledge. We talked a little about how scientists observe meteorite specimens, too, before launching into our first hands-on component... 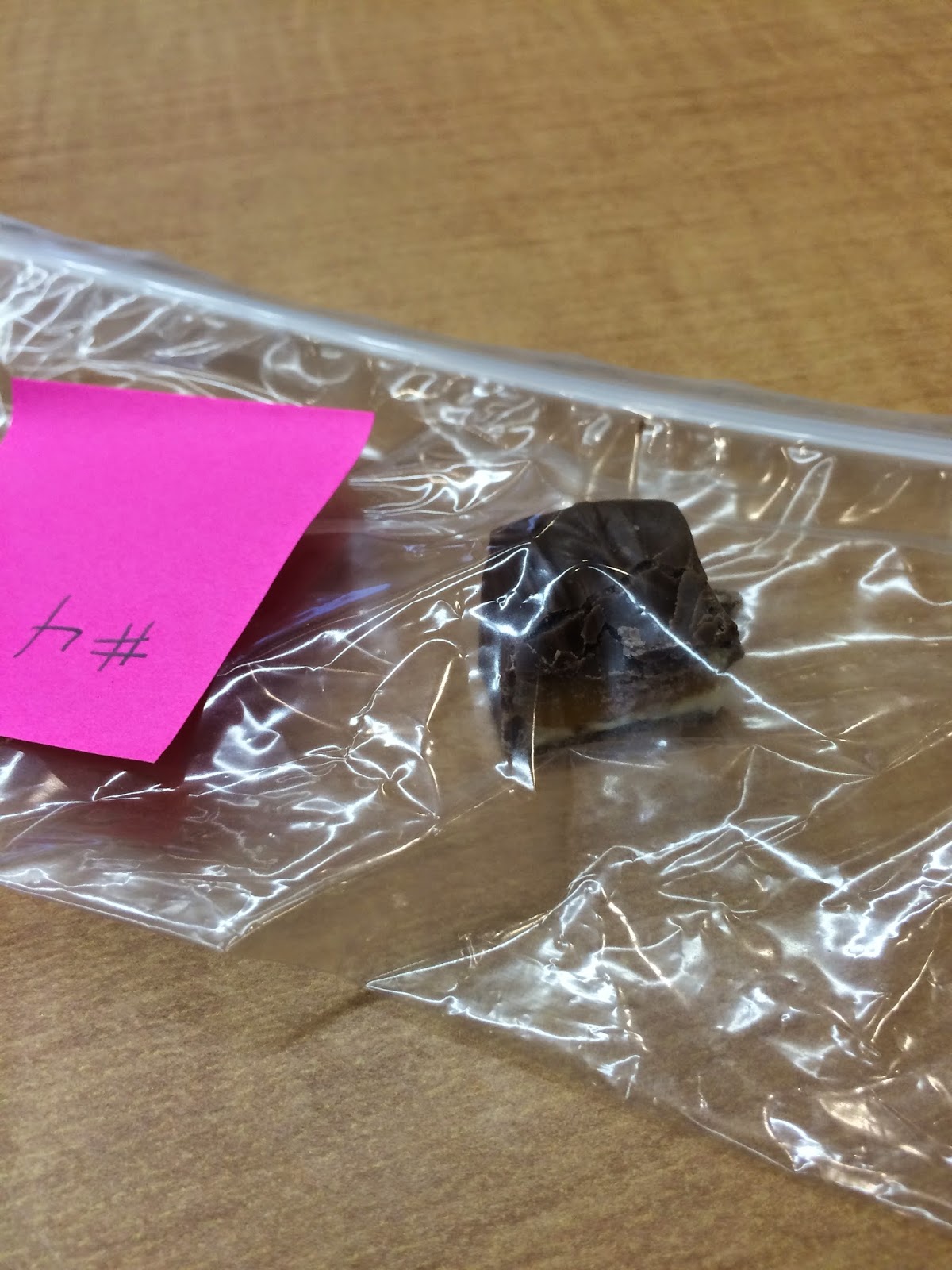 Observing meteorite specimens! For this activity, I got 6 different types of fun size candy bars. I cut each bar in half to give a clear cross-section of the inside, then put each piece in a labeled plastic baggie. Each type of specimen was numbered so kids could keep track of their progress in observing meteorites.

I created a meteorite observation log with space for kids to sketch what they saw as well as use words to describe the specimens. I prompted them to look for layers and patterns, and describe what they found. Once it became evident that the specimens were really chocolate, the kids then wanted to hypothesize what type of candy bar each specimen was based on their observations. All in all, quite similar to observing rock specimens before submitting samples to formal tests (except, usually, no one asks if they can eat a rock). 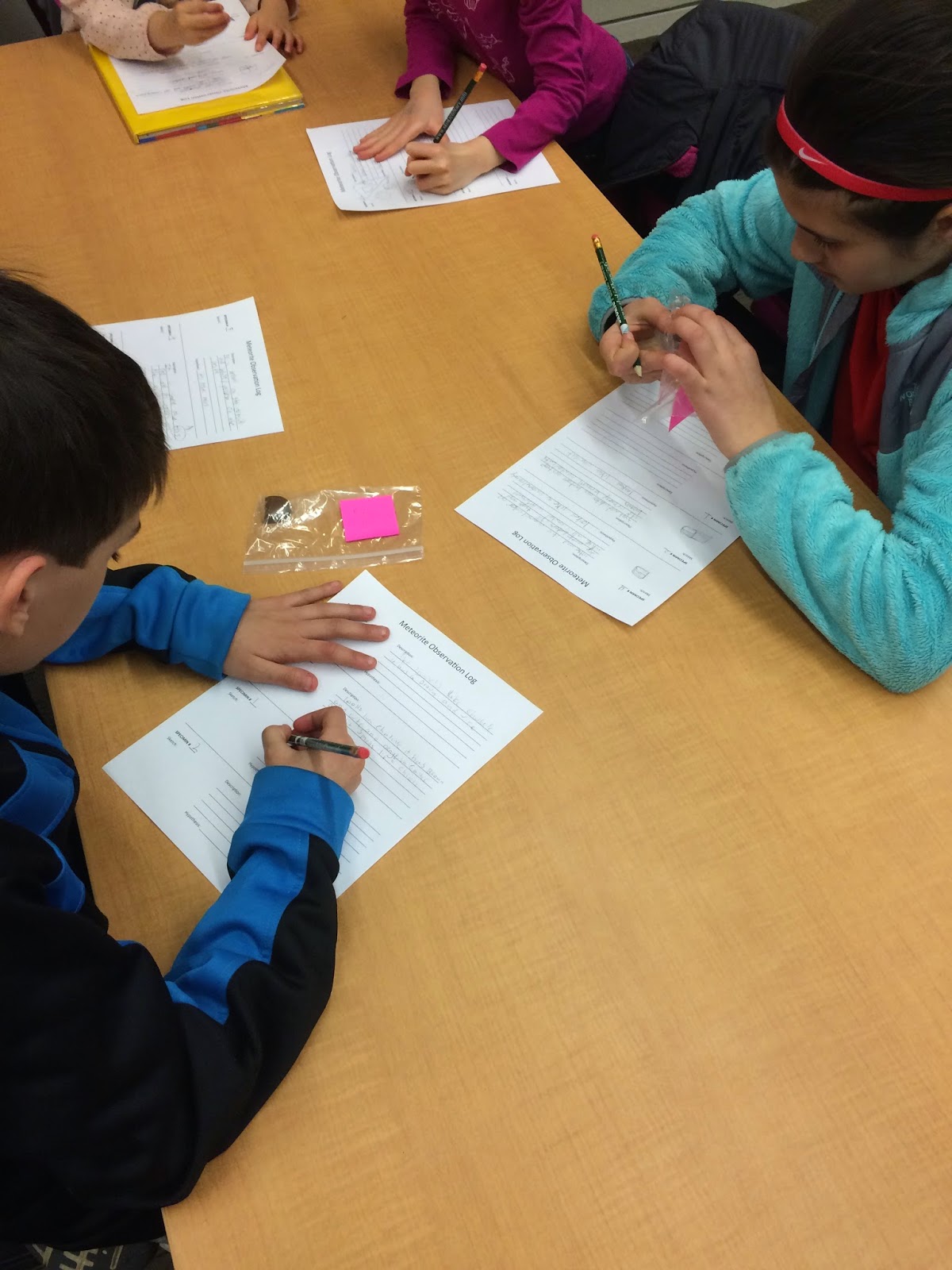 Then we reconvened to talk a bit about craters. We compared evidence of meteorite impacts on the moon with those on earth, talking about atmospheres and weathering and erosion. The sample crater images I showed (all from NASA) depicted craters on earth that have become less and less visible over time, culminating in a seafloor scan of the Chicxulub--otherwise known as the crater formed by the meteorite impact that caused the mass extinction of the dinosaurs and other living things on earth at the time.

We did our final hands-on activity to demonstrate how meteorite impacts create craters. I had an aluminum baking tin filled with flour, as well as a golf ball, and kids took turns dropping or tossing the golf ball into the flour from different angles to see the types of impacts they made. The flour easily allowed craters to form, creating a great visual--especially in the instances when the force of the impact caused "earth" (flour) to scatter up and away from the impact point. The kids enjoyed the activity, both as a scientific demonstration and as an excuse to get a bit messy. (I would recommend doing this particular activity with a second set of helping hands, or a very orderly line, as there's always at least one kid who would like to just dig their hands into the flour if allowed.)

We wrapped up from there, with kids who attended alone rejoining their parents outside the room. All in all, our 50-minute science excursion was fun and, hopefully, informative for the kids. The professor will be back next month, but an interlude about meteorites can make for a good substitute.

The slides I created are below.