All Aboard the Airship! Or, Steampunk for School-Agers 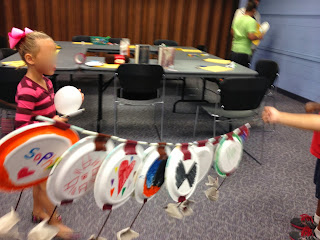 While I've not read a ton of steampunk, my few recent forays into the subgenre have been marked with great stories and page-turning premises. In short, I've found steampunk delightfully imaginative, and I couldn't see why school-age kids wouldn't have a similar reaction. Thus my school-age steampunk program was born.

In this 45 minute unprogram, we talked books, played a game, and got crafty. Here's what it looked like:

All Aboard the Airship!

The first element I include in any of my unprograms is something that ties to the library--in this case, book talks. After discussing what "steampunk" means and where it got its name, I shared a few of my favorite steampunk books with the assembled kiddos in the form of book talks. I consider Matthew J. Kirby's The Clockwork Three, The Expeditioners and the Treasure of Drowned Man's Canyon by S. S. Taylor, and Lemony Snicket's A Series of Unfortunate Events to be great examples of steampunk for the middle grade reader. I had copies of these books, both print and audiobook when available, for kids to check out if their interest was piqued. (Quite a few copies did make their way out of the library post-program). 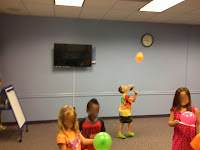 After our book talks, I got the energy level pumping by introducing a game I called "Airball." One might liken the game to ping-pong with balloons. I made paddles by fixing jumbo craft sticks to paper plates, and we swatted at balloons in an effort to keep them off the floor. Things got really interesting when, with 7 balloons in play, we formed a wide circle and planted our feet on the ground. All of the kids had fun trying to keep the balloons aloft swinging their paddles only in the radius of their arms' reach. 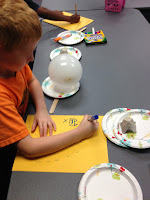 In talking about steampunk books, we discussed how many of these titles take place in interesting or fictional places, and thus they include detailed maps. Thus we got down to the business of making our own maps, marking spots for treasure or warning about villains and giving places ominous-sounding names. Quite a bit of creativity was on display in the creation of these steampunk maps, although the younger children didn't have as much interest in adding details to theirs.

Our final activity was to make those titular airships. Using paper plates, a straw, a single-egg portion of an egg container, yarn, and duct tape, we built and decorated our airships. To make them fly across our room, we threaded them onto some string using the straws we had taped to their tops. Pretty soon we had a colorful airship parade making its way across our programming room.

We finished our activities a few minutes past the 45-minute stated program length, but as everyone was enjoying themselves, no one seemed to mind. In fact, a few of the kiddos, after perusing the steampunk books on display, stayed in the room playing Airball a little longer. A successful program, by one definition, is one where the activities facilitate sustained engagement.

Have you offered genre- or subgenre-focused programs for the school-age kids who use your library? What works for you?