My library just hosted our second annual Star Wars Day during our local school district's spring break. I worked with co-workers and teen volunteers to offer a variation on the Jedi Academy program we had last year, and after small bursts of program prep over the last two weeks, I can say that our program was just as much of a hit this time around. Our final count was 216 attendees, plus 5 teen volunteers and 4 staff helping in shifts. Here's what we did:

1. Costume Crafts -- Kids were encouraged to show up in costume, but I wanted everyone to have the opportunity to dress festively regardless of what they have at home. I drew templates for two costume headbands: Leia buns and Yoda ears. I printed the templates onto construction paper, and kids could cut and staple to create the costume they wanted. 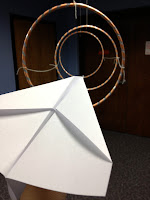 2. Droid Toss -- This game was a repeat from last year--so many kids don't know what Bozo Buckets was, so they're intrigued by this "new" game. Kids tossed soft balls (meant for pool play) into a series of small trash cans decorated like droids; their reward for their effort was a piece of candy. 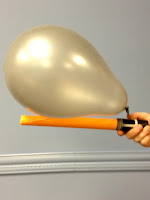 4. Lightsaber Station -- I expanded on last year's Lightsaber Practice station, wherein young Jedis tried to keep balloons afloat as long as possible using a lightsaber. This time they made their own lightsabers, using a cut out hilt template on white cardstock and a piece of rolled-up neon cardstock for the blade. After creating their own lightsabers, which they could take home, kids tried to balance the balloons.

5. Destroy the Death Star! -- It takes precision with a laser gun to shoot down the Death Star, as we all learned in Episode IV. I made a posterboard Death Star, affixed it to a cardboard box, and cut a 4"x4" hole in the setup; kids then stood behind a masking tape line with a "laser blaster" (Nerf gun) and attempted to make the Death Star-destroying shot. The reward, aside from blowing-up noises from me, was a piece of candy. 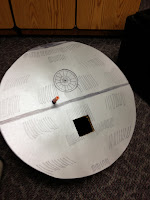 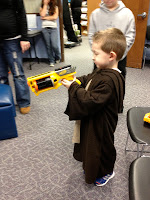 6. Jedi Library -- I put out Star Wars books we had on the premises as well as several copies of everything from the Origami Yoda universe. The Jedi Library also boasted instructions for folding Origami Yoda, a template for making a Fortune Wookiee, a life-size cut-out of Darth Vader, and some great Star Wars READ posters from ALA. Lots of books checked out.

7. Jedi Archives Trivia -- I recycled the trivia questions a volunteer made for us last year. This time our trivia station was located at the reference desk--an attempt to keep people circulating throughout the library during the event. The very accommodating adult reference staff asked the young Jedi questions (easy, medium, or hard), for which they were rewarded with their choice of Star Wars sticker.

8. Imperial Photo Ops -- I feel lucky to have local members of the 501st Legion who are available to attend my Star Wars programs. Their in-universe costumes are meticulous, and there's nothing quite like a young Star Wars fan getting to see a full-size, "real" Storm Trooper. Any library (or other group, for that matter) can submit a request for an appearance on their website; the more notice you give them, the better the chance they can attend. We had 4 costumed members of the 501st at our program this year, and they spent their time posing for photos with the kids, walking the library, and trying some of the activities. (We had cookies and lemonade for them in a staff area for when they wanted a break.)

We made a few substantial modifications to the program itinerary this time around. First, we spread the program over 3 hours instead of scrunching it all into one; we advertised the program as come-anytime-during-the-event in the hopes that our large number of attendees would be spread out (as opposed to the 170 people in our relatively small room in one hour last year). This switch was definitely successful--we had a bunch of people in the first hour, then a slower period in the middle, followed by a second influx of families in the after-work 5-6 p.m. hour.

I highly encourage any and all libraries to offer some sort of Star Wars-themed event/craft station/etc. The kids love it, the parents and caregivers get really into it, and there are plenty of opportunities to be part of a larger library celebration throughout the year. There's May the 4th Be With You coming up, then Star Wars Reads Day in October. Make plans--these are the library programs you've been looking for.