A major talking point of the Common Core Standards is its emphasis on non-fiction texts for all readers. In the fourth grade, according to the standards, a child should be reading a 50% fiction and 50% non-fiction (literature classes still focus on fiction, and non-fiction comes into play in science and social studies). As a librarian, I see wonderful potential in this recommendation. There is a lot of really wonderful, quality non-fiction out there, and it doesn't always get the attention or reader enjoyment that it deserves. Publishers are responding to the Common Core Standards, though, by making great non-fiction available for readers at all levels. Here's a look at three terrific non-fiction picture books that will be released in the coming months. 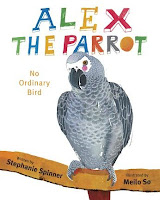 Spinner, Stephanie. Alex the Parrot: No Ordinary Bird. illus. by Meilo So. Alfred A. Knoft BFYR. 9 Oct. 2012. p. 48.
When graduate student Irene Pepperberg purchased an African grey parrot from a pet store in the late 1970s, scientists were just starting to consider the idea that animals might have intelligence. Pepperberg named her new bird Alex, and she began to try to teach him to speak--African greys had been long known for their ability to mimic sounds they hear, but Pepperberg wanted to show that they could use sounds deliberately. Alex did indeed learn, and pretty soon his vocabulary and sentence construction skills were similar to those of many preschoolers. Alex the Parrot introduces readers to an extraordinary bird who, with the help of his devoted scientist friend, helped to expand research into animal intelligence beyond primates. The text is divided into five short chapters and is accompanied by lovely, colorful illustrations. This book would fit well in a unit on birds, science, or learning. 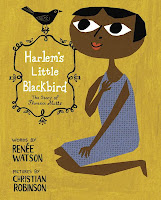 Watson, Renee. Harlem's Little Blackbird: The Story of Florence Mills. illus. by Christian Robinson. Random House BFYR. 23 Oct. 2012. p. 40.
Florence Mills grew up with little, the daughter of former slaves in a "teeny-tiny, itsy-bitsy" house outside of Washington, D.C. Her life was rich with song and music, however, and young Mills had a voice that would take her to sing in New York City and London. Mills became a star of the Harlem Renaissance not only for her remarkable voice, but for her devotion to equal rights as well. With every new personal accomplishment, Florence remained mindful of others--the poor, the sick, and the oppressed--and when she died young, she was honored and remembered by thousands. Watson's text has a great rhythm to it to mirror Mills, and Robinson's illustrations are bright and beautiful. This book will make a great addition to units on music, biography, and equal rights. 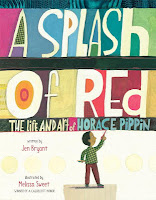 Bryant, Jen. A Splash of Red: The Life and Art of Horace Pippin. illus. by Melissa Sweet. Alfred A. Knopf BFYR. 8 Jan. 2013. p. 40.
Horace Pippin took pleasure in drawing and painting pictures from a young age, but Pippin set aside that enjoyment  to focus his efforts on earning money for his family and, later, fighting in WWI. After a war injury left him with limited use of his dominant right hand, Pippin returned to the states to marry and try to work odd jobs. Upon finally picking up an artistic implement again, however, Pippin found that not only was making art therapeutic--both physically and mentally--but he was good at it, too. With simple prose and beautiful illustrations, A Splash of Red tells the uplifting history of a man who was celebrated for the honesty and expressiveness in his artwork. This book will support units on art, biography, WWI, and equal rights.
Posted by Amy at 4:00 AM