Lorelei's life hasn't been so great lately; her mother died a year ago, her father has just gotten remarried to a superficial and deceptive woman, her brother is being mean to her, and her school has burned down. Luckily there's a new school in the area, and the kind principal of Splendid Academy seems like a fairy godmother after all Lorelei has been going through. Lorelei and her friends are completely in love with this new school, with its amazing playground, lax classroom rules, and divine food--breakfast, lunch, snacks galore... But everything might not be as wonderful as it seems. When Lorelei and her new friend Andrew team up to find out the truth about Splendid Academy, they end up having to use their wits and their wiles to overcome the witchy magic that threatens all of the unsuspecting students. This adventure tale has a steady pace and intriguing plot, but it goes deeper than the average fairy tale-esque adventure. The story also explores a child's guilt after a loved one's death, bullying, and obesity in a fashion that does not feel heavy-handed. 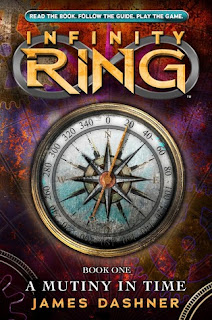 Dak and Sera, two genius pre-teens, live in an alternate present in which a nefarious group called the SQ is in control of everything across the globe. History, Dak's favorite topic, is noticeably different from what readers know; for example, Christopher Columbus was thrown overboard during a mutiny on his momentous voyage, and the mutineers were credited with the discovery of the Americas. It turns out that Dak's parents have been working on a time travel device called an Infinity Ring, and a secret group called the Hystorians have an large interest in the device. Each major break from the historical timeline as readers know it, it seems, has done damage to the fabric of time, resulting in horrible natural disasters as Earth barrels toward destruction. After Dak and Sera find themselves in the secret headquarters of the Hystorians, they learn just how important the Infinity Ring is to righting the wrongs in history--and the fate of the world falls to their hands. This first title in a new, multi-author series has a definite 39 Clues-style look and feel, and the well-plotted adventures of the dynamic leading pair have a captivating amount of humor and intrigue. Sure to be a hit with fans of The 39 Clues series.

Bartholomew is a changling in an England totally unfriendly to those with human and fairy blood. He and his sister need to stay hidden for their safety--especially now that changlings have been turning up murdered in the Thames. When an MP stumbles upon the horrendous plot behind the murders, he goes to great lengths to try to thwart the malicious intentions of a fellow parliamentarian. The stakes become even higher for everyone once Bartholomew's sister is kidnapped and the clock begins to tick ever nearer to a cataclysmic event. This narrative-heavy debut looks to be the first in a series, and its combination of steampunk, fantasy, and science fiction elements will appeal to readers in a variety of genres. 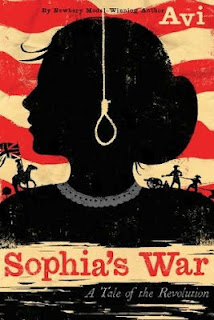 It is 1776, and Sophia and her family are in New York City, hiding their American Patriot sympathies from the British who are occupying Manhattan. When a British officer comes to board in Sophia's house, the family must even conceal the existence of Sophia's brother William, who is off fighting under George Washington. Sophia has always considered herself as strong a Patriot as her brother, but living with this British officer--with fine manners and flattering words--has left her feeling conflicted about her sympathies. Conflicted, that is, until something horrible happens to Sophia's family and solidifies her feelings toward the British forces. The second half of the book flashes forward to 1780, when Sophia decides to do something to support her Patriot beliefs and agrees to work in a British officer's household as a spy. Sophia uncovers a massive military secret--but it comes from the pen of the officer who once lived in her family's house. Suddenly all the events in Sophia's life are matters of life and death--and her life is not the only one at stake. This engaging historical novel excels with Sophia's strong voice, and her struggle reconciling her political beliefs with her personal feelings comes across as nothing but genuine. Rich with historical detail, this novel will be a great read for fans of Dear America and like series, and its superb writing gives it something more than most books in the genre.

All four novels were reviewed in their galley formats. The final published books may differ from the review copies.
Posted by Amy at 6:00 AM