Alice in Wonderland always seems to be a perennial favorite with kids. It's got fun, nonsense, book-to-movie goodness (both cartoon and live action!), rhymes, imagination, curiosity...all things, in my experience working with children, that draw kids to a story. So why not, I figured, offer an Alice in Wonderland-themed program for the summer preschool and school-age crowd? Our own golden afternoon, as it were?

Why not, indeed. It was certainly apparent that kids were interested in a Mad Hatter's Tea Party--within about 30 hours of registration opening for the initial program, our roster was full with a substantial waiting list. I opted to open up a second session of the program on the same day; same snacks, same games and craft, but twice the happy attendees. This decision ended up being a good call, as the second session filled up pretty quickly, too. The high demand filled both the programs, which made them extremely high-energy and lots of fun. It's an easily replicable and adaptable program plan: 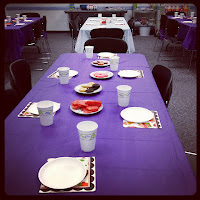 I had the tea party drinks and snack components all set up at tables before children arrived. Our library has a stash of old china saucers, and I used these as serving dishes for watermelon and a variety of cookies. I pre-portioned everything for easier handling by attendees of all ages. I asked a few moms who came in the room to help me pour the drinks--Sunny Delight, in a variety of flavors--and within a few minutes of starting the tables of funnily be-hatted kids were all achatter. Some came with friends, some on their own, so I encouraged them to turn to a neighbor to say "How do you do?" and shake hands (get it?!). I then prompted them to share what they've been reading for summer reading. As I went around each table playing hostess, I was able to greet everyone and get an update on SRP progress.

After about 15 minutes of snacks and chat, all of the stragglers had arrived, so we segued into some Alice-themed nonsense. We had tongue twister races, and lots of kids offered their favorite tongue twisters for group trial. I also recited my favorite Alice poem ("How doth the little crocodile"), which they seemed to get a kick out of.

Then, games! We had a caucus race (musical chairs, albeit played with sit-upon cushions instead of chairs for easier use with such a large number of kids), and I used an Alice soundtrack to source the game music. Next we played The Queen of Hearts Says (Simon Says), which needed a bit of initial explaining for some of the youngest program attendees. A few of them struggled with the concept of the game, so in my second program I opted to let an older girl play the Queen of Hearts. Lots of the girls giggled at how bad I am at the game (which I was not faking), and once Miss Amy was sitting out, not winning didn't seem quite as big a deal. 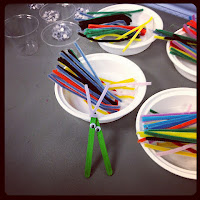 With about 20 minutes left in the hour-long program, we all moved back to our tables for a craft. I had the children clear their tables in exchange for their craft supplies--a tip I learned working meals at summer camp--so the tables were an open canvas for craft creativity. Our mission: to create an army of mome raths. I adapted the linked craft to use rainbow-colored popsicle sticks (instead of painting our own), and we also used pipe cleaners in place of feathers to cut down on a sticky feather mess. All ages of the children got really into the creation of their mome raths--some made theirs hats, some appendages, some clothing... I always love how the simplest crafts promote the most variety of creations among children.

As the kids finished up their mome raths, I thanked them very much for coming to the program. Everyone who left the Mad Hatter's Tea Party was all smiles. And there's nothing curious about that.
Posted by Amy at 8:05 AM